Two years on from its launch, Kirstie Wright and Henk Kombrink discuss how the North Sea Core initiative is helping to support the future of geoscience

Any geoscientist who has trained or worked in the UK is aware that for such a small geographic area, the onshore geological record is remarkably diverse. The same can be said of the offshore geology, which preserves Precambrian basement to Late Cenozoic sediments.

Gaining access to the offshore geology requires a range of tools and techniques that includes everything from dredging the seabed, to remote imaging, to drilling wells. With the UK offshore basins home to the petroleum industry since the 1960s, it is core material retrieved from the wells drilled during this time that have provided a unique window into the subsurface.

Since October 2017, we at North Sea Core Community Interest Company (CIC) have been collecting core material made redundant due to the abandonment and decommissioning of wells on the UK Continental Shelf. In turn, we transform and upcycle core for use by the geoscientific and wider scientific community.

The North Sea Core initiative was founded on the basis that core material provides an invaluable resource for understanding the subsurface. Rather than see this material fall into disuse or be discarded, it should be preserved as part of our geoheritage and as a teaching resource. Therefore, we only collect material that has been sourced from surplus company samples and approved for donation by the Oil and Gas Authority, as documented in the Petroleum Operations Notice 9 (PON 9) guidance, with no material removed from the British Geological Survey collection.

This November marks two years since we started North Sea Core and six months since it became a Community Interest Company. The campaign to save the core material started when Henk was alerted to the disposal of core while serving as the Petroleum Exploration Society of Great Britain (PESGB) Aberdeen Director and began to advertise the fact. He created what is now the basis of North Sea Core, by collecting and upcycling this valuable material into accessible resources. This led to a partnership with Kirstie Wright, who became involved while serving on the committee for the Petroleum Group of the Geological Society of London (now the Energy Group).

North Sea Core officially launched in November 2018, using a dedicated email, website, and a range of social media accounts to centralise our operations and reach a wider audience. We are also assisted by a team of volunteers who donate their time and energy, supporting our aim to collect, transform and distribute core to the wider geological community for education, research, outreach and display.

In May 2020, we formalised our initiative by becoming a Community Interest Company, giving us scope to grow in the future and become a sustainable enterprise, potentially providing employment. Different to a traditional Limited (Ltd) company, as a CIC we have a legal clause known as an “asset lock” that states any profits generated through the sale of core are reinvested into North Sea Core and used to benefit the Geoscience community, rather than divided between directors.

We believe that long after core material has served its purpose in the petroleum industry, it still has the potential to answer new questions. Core can have a second life in making geology accessible to non-scientists, educating the next generation of geoscientists and aiding in the research for future energy needs.

While most of our core is from the UK North Sea, other samples have come from the East Shetland Platform, Moray Firth Basin and the Irish Sea Basin. The material includes a variety of cut core and resin-impregnated core slabs, ranging from the Carboniferous to the Paleocene. These supplies, at the time of writing, have enabled us to send over 260 national and international packages of core to 21 countries. We have achieved this by collating and creating resources aimed at education and science outreach. The packages can range from small individual half-cut core samples, to much larger bespoke teaching sets, with selected core and associated logs, reports and maps—all chosen depending on the needs of the course or teaching environment. 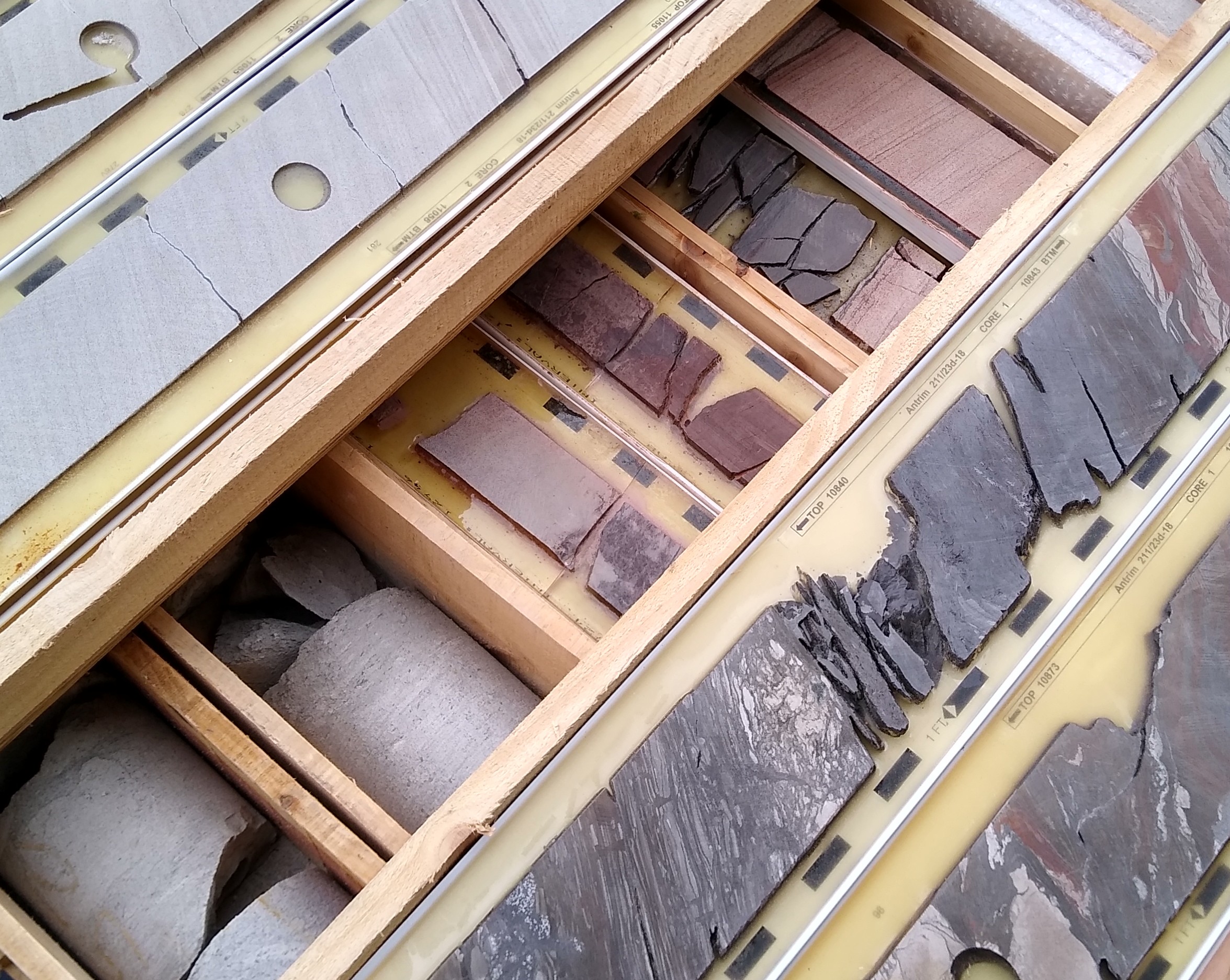 These resources include a range of Exploration Boxes. Each box contains five samples that support the chosen geological theme of the box, together with an explanation sheet. Our first box explored the petroleum geology of the North Sea and was generously sponsored by the Petroleum Exploration Society of Great Britain, the Petroleum Group of the Geological Society of London and the Oil and Gas Authority. Our second box explored the depositional system of the Middle Jurassic delta in the Northern North Sea, which provides the key reservoir for the Brent oil field. Named the BRENT Group, the Broom, Rannoch, Etive, Ness and Tarbert Formations record the progradation, deltaic, coastal plain and transgression of the delta. Future boxes are planned and may explore topics ranging from the depositional environments of the Southern North Sea to Geothermal Energy.

We also cater to interested geologists and the industry from which the core material originated. This varies from individually selected core samples of framed cores that serve to explain a person’s work to their friends and family, to larger geological displays that consist of core material, maps, cross sections and explanatory text. These larger displays help communicate the geology of a region, the nature of the subsurface and the type of work companies undertake. Conference gifts and prizes are also popular, with material supplied to recent DEVEX and PETEX conferences, and the Oil and Gas Authority National Data Repository launch. 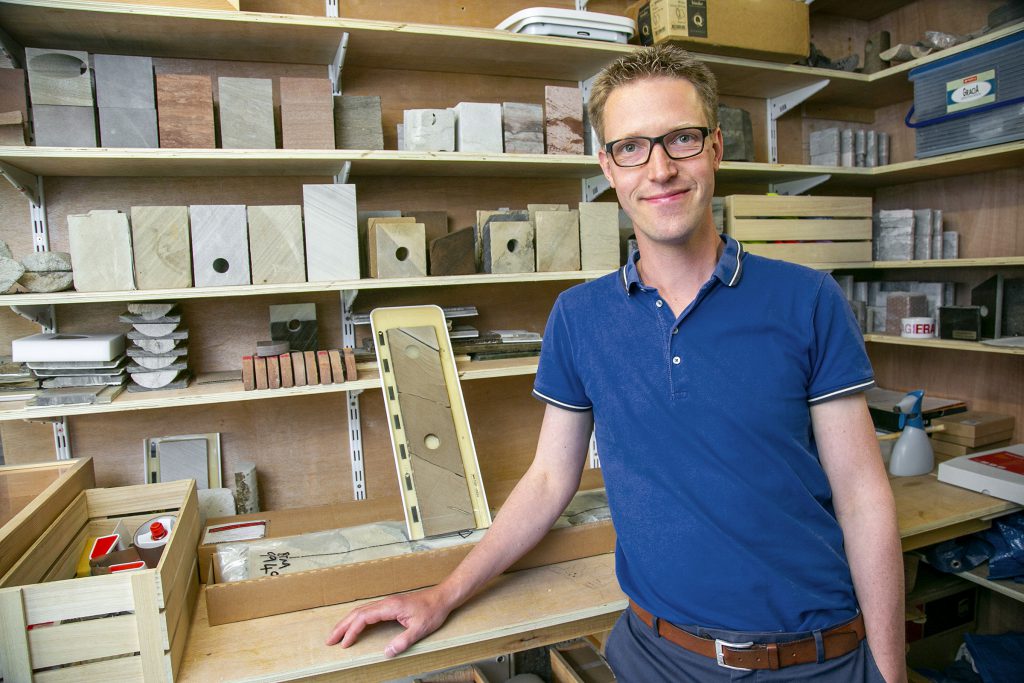 Henk Kombrink in the North Sea Core HQ with a range of core samples, cleaned and prepared, ready to be shipped to their new homes. Photo: Rory Raitt.

A future resource
While much of our work may be focused on the geological past, we are also looking to the future. The

relinquished core has provided an opportunity for us to support a variety of research projects ranging from digital rock microscopy and fracture mechanics, to unconventional gas and well completion and abandonment. We believe core also has the potential to assist in the research of geothermal resources, as well as carbon capture and storage—with recent requests exploring this.

In addition to the physical core, it is vital to integrate digital data where possible and we utilise open access data from both the Oil and Gas Authority’s National Data Repository and the British Geological Survey. Using these data, we can place the core in both a local and regional geological context, combining it with other subsurface information, such as seismic, petrophysical and stratigraphic data. Where possible, we make this integrated material available for use with a Creative Commons licence.

We are extremely grateful to those who have engaged and championed our initiative, helping it become a success. We plan for North Sea Core CIC to be an established resource that serves the geoscience community by providing access to core and offering training. We will continue to seek funding, form collaborations and work with partners to maximise use of this important geological resource. 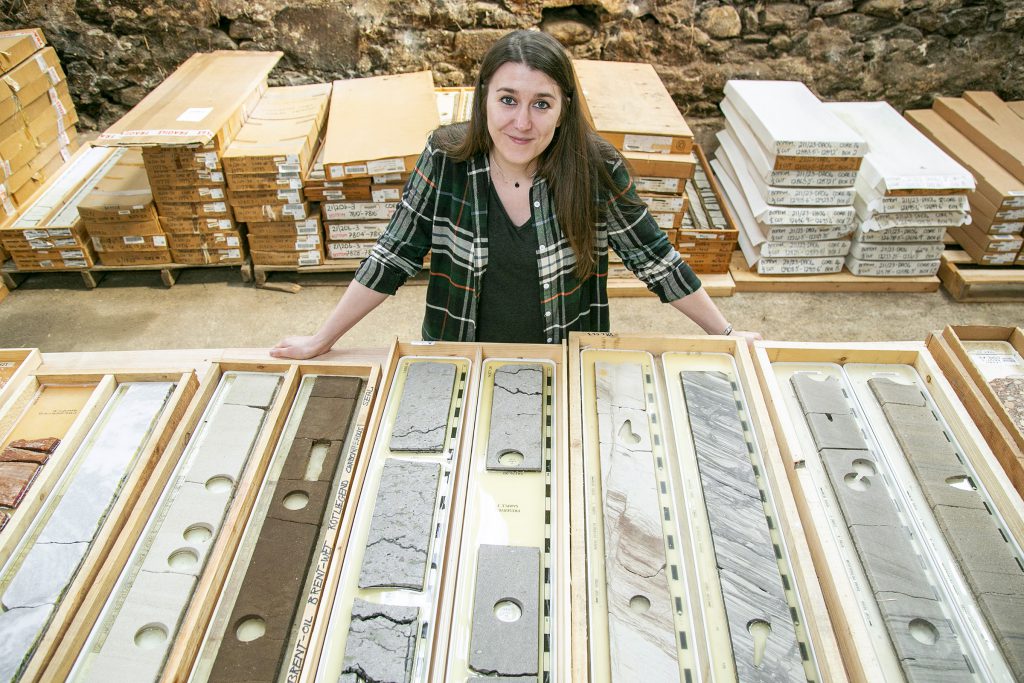 Kirstie Wright in the North Sea Core store with material, ranging from the Permian to the Jurassic. Photo: Rory Raitt.