Involving non-scientists in research has a long pedigree in other fields, but uptake is slow and cautious in the Earth Sciences. With experience from western Nepal, Jonathan Paul describes how citizen science projects can be done

In December 1900, the American ornithologist Frank Chapman proposed an alternative to Christmas ‘side hunts’ – a tradition in which Americans competed to kill the most birds, regardless of use, scarcity or beauty. What if, Chapman suggested, we count birds instead of killing them? On Christmas Day 1900, 27 observers participated, counting between them 18,500 birds belonging to 90 species. The count has since been held every winter – 2,615 ‘counters’ took part in the 2018-19 event. The Christmas Bird Count was one of the first of what have since become known as ‘citizen science’ projects.

It’s not surprising that citizen science has taken off in recent years. The explosion of new technology following the rise of the internet during the 1990s has enabled people to feel more interconnected. In the context of multiple global crises, of which the climate emergency and fallout from the Covid-19 pandemic are arguably the most important, this connectivity has helped us regain a sense of agency over events that perhaps seem frightening, inchoate and difficult to control. Since the term first emerged in the early 2000s, citizen science was immediately recognised as having the potential to mobilise people’s involvement in large-scale information gathering.

New technology, including increasingly sophisticated smartphone apps, has enabled citizen scientists to record millions of observations of, for instance, the occurrence of seismic activity (via accelerometers), landslides (from photos and videos), or even air and water quality. Non-scientist engagement in geoscience has perhaps been most pronounced in resilience-building efforts related to geohazards. The motivation for citizens taking part is clear: they help scientists take additional measurements to patch up data gaps, and in return the scientists will provide expert advice on how to stay safe.

It is important to recognise that our skills as geoscientists are not necessarily sufficient to render such engagement successful and useful. Citizen science is widely considered to be a sub-discipline that is very easy to do badly, but much harder to do well. Getting it wrong has consequences; it can lead to a lack of trust in the community towards governments or professional scientists.

The best projects have their aims defined at the outset, and have project members that are proficient in both science and communication

The challenges of setting up a successful citizen science monitoring programme are numerous. Issues range from the need to provide incentives to participate, to the highly variable quality and fragmentary nature of citizen-collected datasets. The two greatest challenges for geoscientists are quite technical. First, we need to develop strict guidelines through which the uncertainty of data generated by non-scientists can be quantified. How can a lay person assess groundwater level or the clay content of a rock, for example? Such protocols could potentially address the second challenge: how do we convince decision makers and other geoscientists of the viability and quality of these data, to the extent that citizen observations can have a real impact on our projects – such as a flood early-warning system or a hydrogeological groundwater model.

There is great potential in the geosciences to transcend a traditional view of the smartphone-equipped citizen passively feeding data to a central database. Working closely with groups of non-scientists throughout the duration of a research project requires more money, careful thought and intensive collaboration with social scientists. The potential rewards, though, are rich, and could include capturing hitherto hidden local knowledge, permanent reductions in geohazard-related risks and improvements in community cohesion. 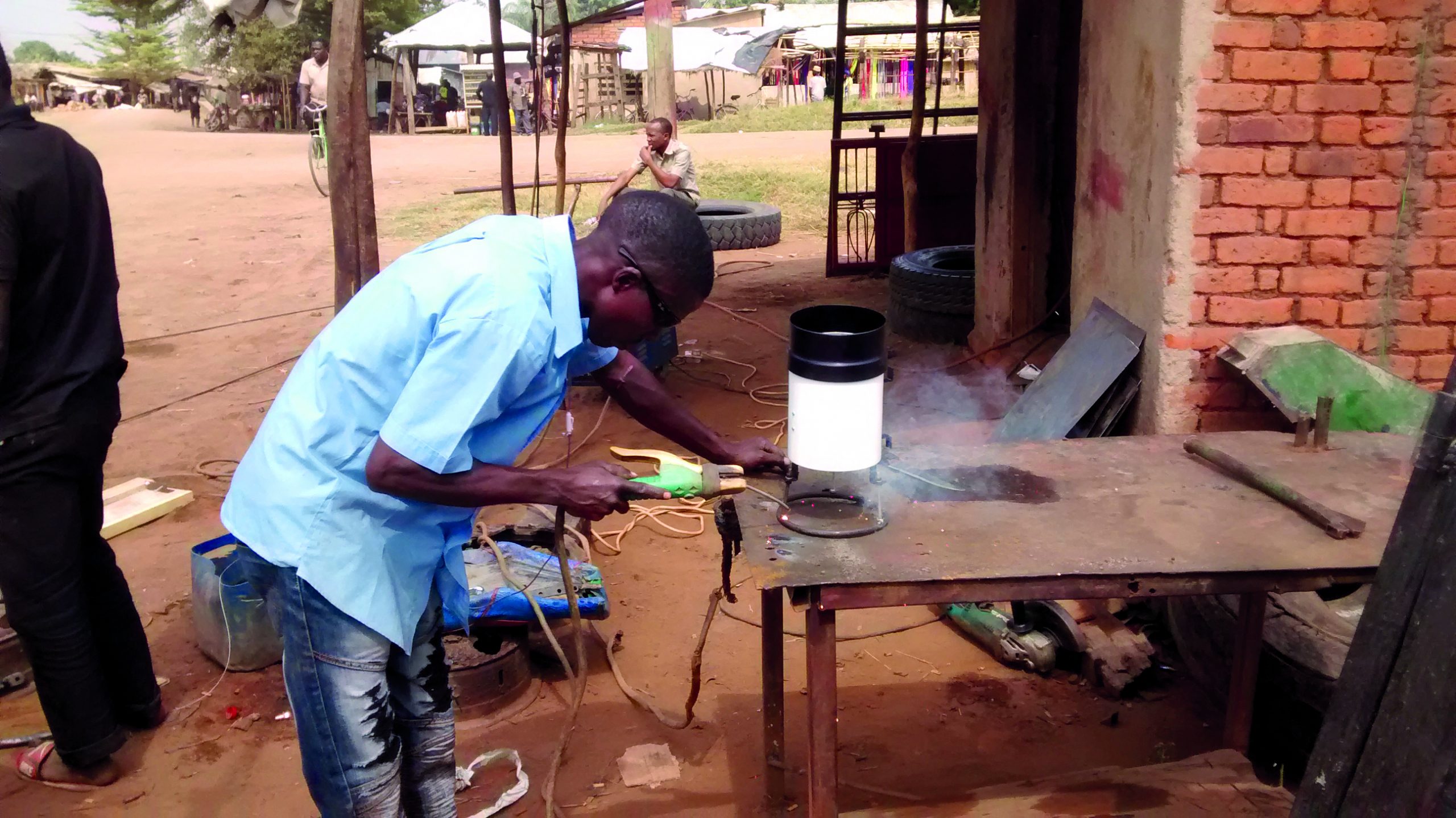 To date, relatively few citizen science projects have been conceived in developing countries, owing to a range of complex and interrelated hurdles including bureaucratic, financial and language barriers, hostile weather, and inaccessibility. In 2019, scientists from Imperial College London, UK launched a new initiative that focused on two secondary schools in mountainous, rural western Nepal (Fig. 1). The goal was threefold: to enhance science, technology, engineering and maths (STEM) teaching in a developing country context; to produce new geoscientific datasets; and to build greater environmental awareness in the new generation of students. 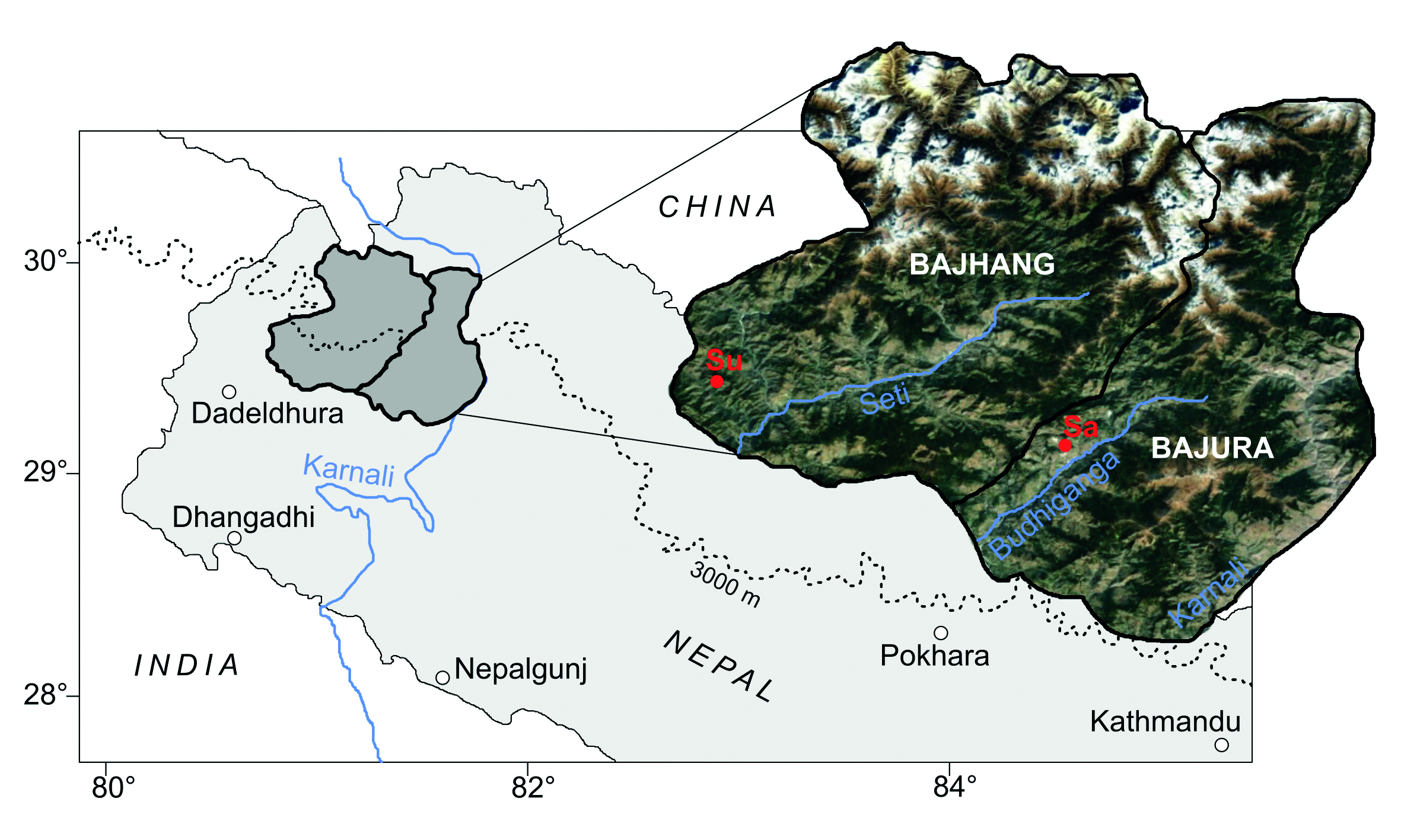 After working closely with local communities for several months, we found schools to be the most effective gateway to local people: teachers are often the most educated and respected community members, while students are enthusiastic receptors of new information, which is then transmitted to their parents. Also, schools offer ready-made organisation and a central forum to bring different local stakeholders together, which is comparatively rare, especially in developing countries.

We started by developing lesson plans with schoolteachers. The content complemented the government-prescribed STEM curricula, but also introduced new material that was tailored for local relevance, such as methods for determining the degree of camber on local rice paddies due to rotational slumping, or measuring changes in river cross-sectional area and discharge through the Monsoon season.

We worked with graphic designers in Kathmandu to generate visually appealing material, such as posters on the water cycle, and the causes and effects of mass movements. Teaching and question-and-answer sessions were delivered by a mixture of local schoolteachers, European and Nepali scientists, as well as student representatives.

Each day included an outdoor practical component where students collected data. In one such experiment, students were trained to collect rainfall data using simple measuring cylinders. The data were used to forge a local link to the broader context of changing patterns of Monsoon rainfall due to climate change, and we found that the students’ data provided an excellent spatiotemporal fit to nearby automatic rain-gauge data (Fig. 2). 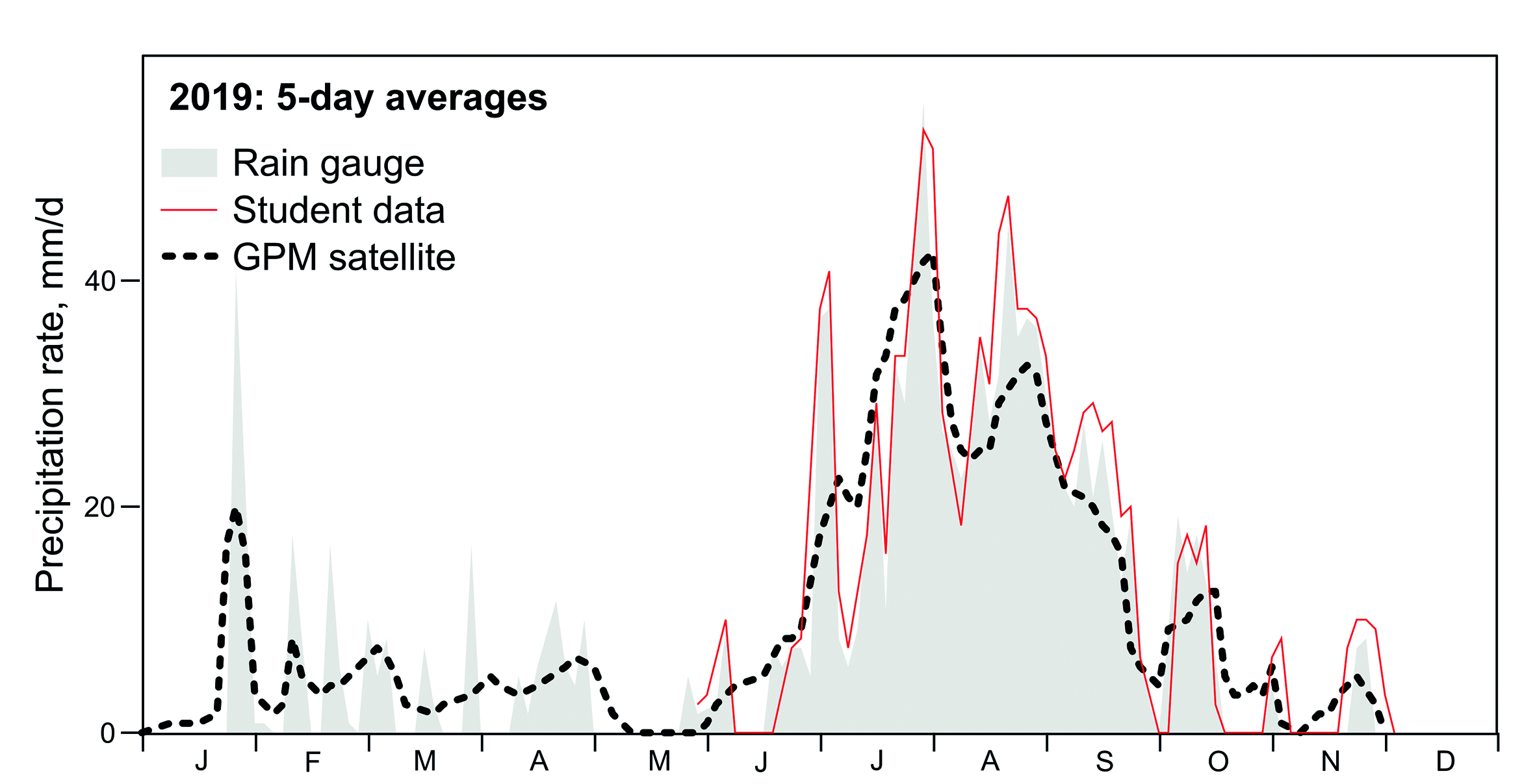 We sought to treat local stakeholders — mainly students and teachers — as equal partners, producing data of objective scientific value. In doing so, we ensured project sustainability beyond the fix-term funding typically associated with research projects in the UK. Specifically, we ensured that community level monitoring and analysis could continue after the funding runs out by meeting weekly with teachers and offering community ownership of scientific equipment, such as the automatic rain gauges and smartphones.

Local relevance
A critical step was to understand the motivation of non-scientist participants: Why should they care? How would ‘our geoscience’ affect their livelihoods? In geohazard research, the idea that a local community would somehow ‘be grateful’ for the presence of professional scientists is a misconception. In many areas that suffer multiple hazards, like western Nepal, local people rate the effects of hazards low on their list of priorities – well below ensuring a good harvest or raising children. So, we strove to make our research as locally relevant as possible.

We sought to become embedded in the local community by using local suppliers or craftsmen to make certain pieces of geophysical survey equipment, as well as by having a PhD researcher living in the local community for several months, eating communally with the school students and teachers, and sleeping in the school hall. We developed simple, low-cost sensors with practical, tangible use, such as river-level sensors that reported in real time. In remote regions where manual data collection was not feasible, local people were given a monthly stipend to maintain equipment or download data.

It is important to go beyond passive data collection and involve citizen scientists throughout the entire life cycle of a research project, from problem conception to the dissemination of results. It is useful to identify who makes decisions locally and to work closely with social scientists. At each of our study sites, we identified one or two significant people – often a head teacher, community or political leader – who acted as useful conduits to the broader community. By channelling our interactions through these people, and involving them in all our school activities, we were able to focus discussion on the specific needs and interests of disparate groups of other stakeholders, such as farmers, local government or those working in industry. 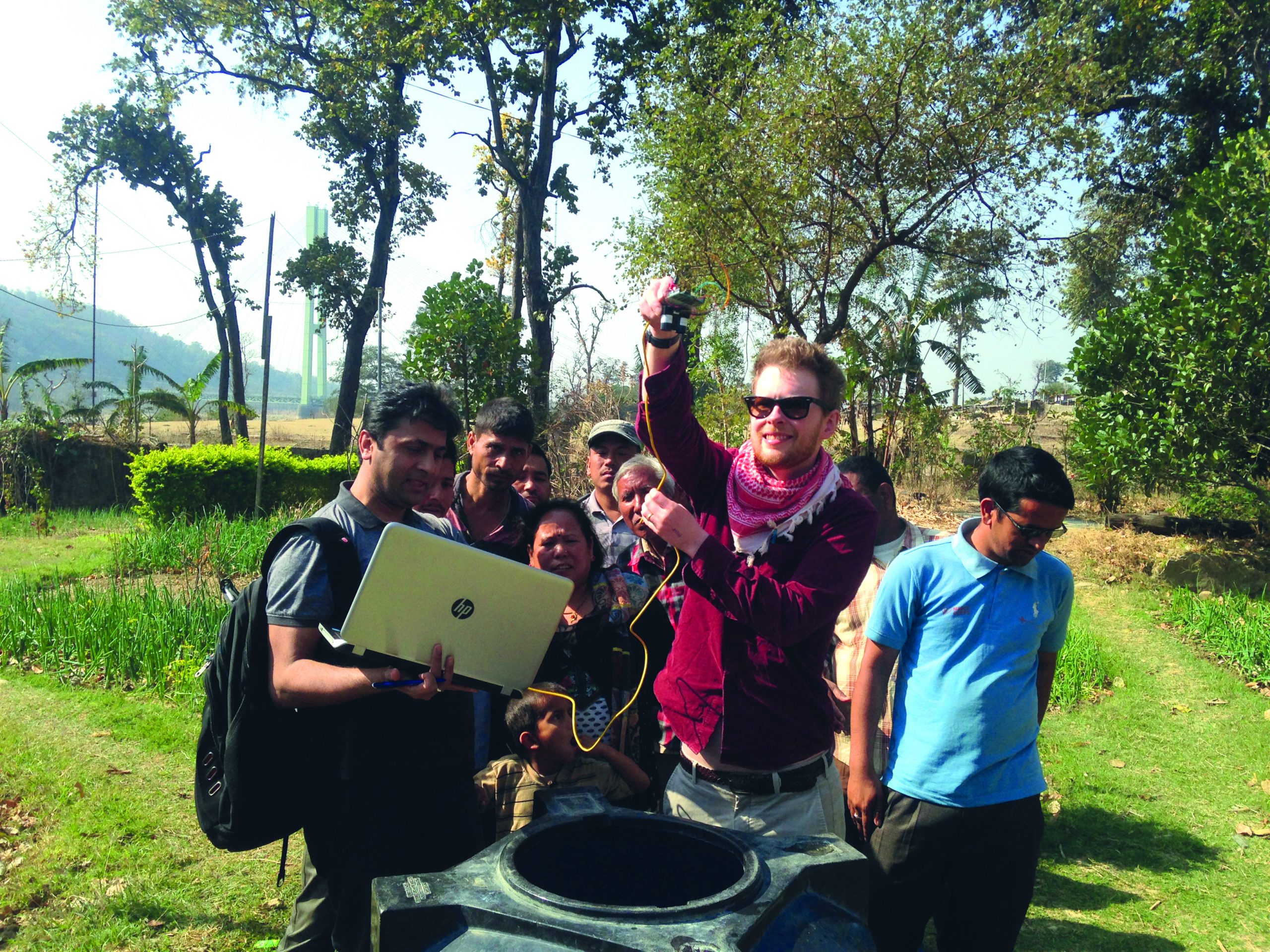 The future of participation
Relative to other disciplines, such as ecology or medicine, the uptake of citizen science has so far been rather limited in geoscience. Geoscientific data are often difficult to interpret intuitively, while measurements can be expensive, complex, spatially sparse and temporally dense. For these reasons, intensive scientific training and specialisation is still normally a prerequisite for data analysis. However, new technological developments can, to some extent, circumvent these limitations, paving the way for the more rapid uptake of citizen science. That said, geoscientists should recognise that the introduction of new smartphone apps is not a universal panacea: encouraging uptake of these apps is challenging, and many app-based projects have fared poorly because there are often few material incentives for participating.

While the exact form that citizen science takes varies widely, timely and accurate information can greatly assist geoscientists in completing research projects. In developing countries particularly, the future of citizen science lies in moving away from monitoring campaigns for geohazards towards a new model in which non-scientists are equal research partners who identify and help to solve local problems of research interest. Projects could involve observational campaigns (such as finding and documenting new springs, ore-bearing rock, or mass movements), community-level risk reduction and resilience building, or education (such as learning how to code while analysing locally collected seismological data).

The participatory approach works best when there is active interest from the local community, so the benefits to local people must be highlighted. In Nepal, such benefits included enriched STEM teaching for local students, improved real-time monitoring of rivers and rainfall, as well as the potential for predictive models that could decrease risks associated with landslides and flooding in the future. The best projects have their aims defined at the outset, and have project members that are proficient in both science and communication, who approach the project with a clear willingness to listen and adapt.

Lessons learnt
•  It is important to be humble when liaising with local community members. H-values and impact factors are meaningless in this context.
•  Keep an open mind regarding local geological conditions and don’t show up with preconceived ideas of local challenges (as we did: “you’re having these landslides because of over-zealous road building”).
•  Local knowledge should be carefully incorporated wherever possible.
•  The local people may have a shortlist of impossible-to-satisfy problems. Present the broad research aims and scientific possibilities at the very beginning of
the project.

Dr Jonathan D. Paul is a Lecturer in Geoscience at the Department of Earth Sciences, Royal Holloway, University of London, UK
jonathan.paul@rhul.ac.uk
@jonnydpaul