When it comes to palaeoclimate, Anna Joy Drury notes that there is so much to be explored, from developing new methods, to reconstructing aspects of Earth’s past climate, to trying to understand how the Earth system functioned during different time periods 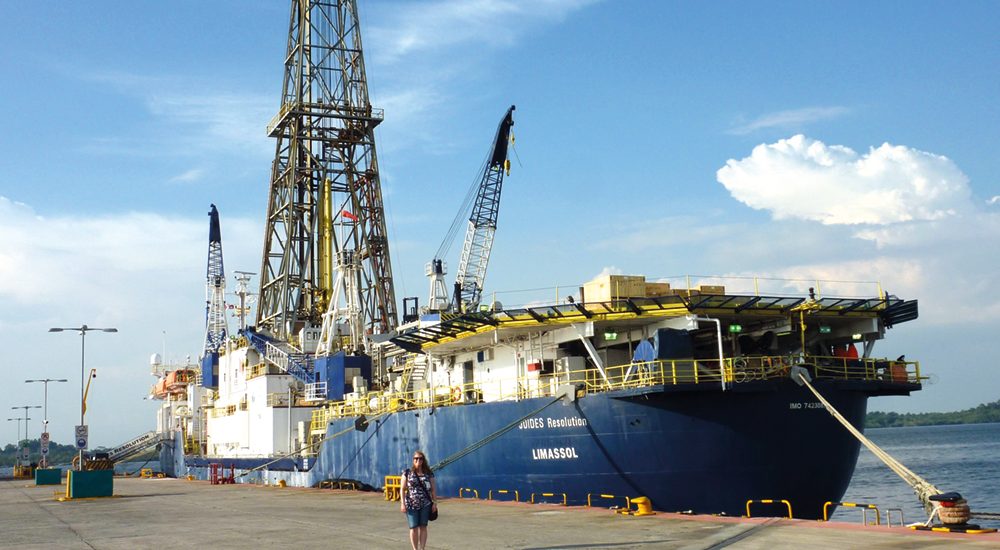 Anna Joy Drury standing in front of the JOIDES Resolution research vessel, which is part of the International Ocean Discovery Program

As a child, potent images of Earth’s natural power and its effect on people’s lives, such as those depicting the aftermath of the eruption of Vesuvius that destroyed Pompeii, made a strong impression on Anna Joy. Her interest in Earth’s past climates, however, was initiated during her undergraduate study at University College Utrecht, the Netherlands, with the realisation that she could combine her love of Earth science, chemistry and history in one topic. A research internship at the Royal Dutch Meteorological Society was followed by an MSc, a PhD and post-doctoral research that spans palaeoceanography, stratigraphy and geochemistry.

Pulling apart the secrets hidden in these data has been fascinating and very rewarding. We are just starting to grasp how different components of the Earth System respond individually to astronomical forcing

Currently, Anna Joy is investigating the driving forces behind potentially long-lasting El Niño-like conditions during the late Miocene and the consequences that the prolonged warmth of such an enduring El Niño-like state may have on global climate. This project uses material recovered during an ocean drilling expedition on which Anna Joy was involved.

“The expedition was run by the International Ocean Discovery Program (IODP), a brilliant international research programme that has been going in one form or another for over 50 years. The programme offers amazing opportunities for international collaboration and recovers marine archives relevant to a host of Earth science topics, including plate tectonic processes, geohazards and past climate research. The recovered sediment cores are essential to my work as they provide archives that capture the history of Earth’s oceans and climates during the Mesozoic and Cenozoic.”

Much of Anna Joy’s research looks at Earth’s climatic response to astronomical forcing.

“The energy that Earth gets from the Sun is controlled by semi-periodic changes in astronomical parameters, such as the eccentricity of Earth’s orbit, as well as the tilt (obliquity) and wobble (precession) of Earth on its axis. Each parameter has its own unique rhythm and they come together to control the amount of solar energy that the planet receives, which in turn influences Earth’s climate dynamics.

“I am interested in the influence of these astronomical cycles on Earth’s climate during the past 66 million years. The imprint of these cycles is often excellent in the marine archives recovered by the IODP, and I use proxies such as stable oxygen and carbon isotopes in foraminifera, as well as geochemical analysis of the sediments using X-ray fluorescence, to reconstruct changes in global ice volume, temperature and the carbon cycle.”

Highly accurate time constraints are required to interpret these records and Anna Joy uses an integrated stratigraphical approach that brings together diverse datasets.

“Where possible, I make sure that the records I work on are underpinned by astrochronology, which is an approach using the imprint of astronomical forcing as a chronometer.”

Anna Joy and her colleagues have made great progress in deciphering the finer details of Earth’s climate change record for the Cenozoic.

“I’ve recently been involved in several projects looking at the changing imprint of astronomical forcing on Earth’s climate. I was one of the leads in the CENOGRID (Cenozoic global reference benthic carbon and oxygen isotope dataset) Project, which provides the most accurate record of Cenozoic climate to date. We showed that Earth experienced four climatic states since the dinosaurs went extinct, classified as ‘Hothouse’, ‘Warmhouse’, ‘Coolhouse’ and ‘Icehouse’. Each state has a characteristic climate variability pattern driven by a combination of atmospheric greenhouse gas concentrations and polar ice volumes.

“I was also involved in the Carbon Megasplice project, looking at the complex relationship between the carbon cycle and wider climate system over the past 35 million years. For much of this time, the carbon cycle varied in tandem with the amount of Antarctic sea ice, but this relationship turned on its head about six million years ago due to the increasing influence of high-latitude climate processes in the northern hemisphere. Additionally, I led a study showing
that carbonate deposition in the Atlantic Ocean occurred in three distinct patterns in response to astronomical forcing, with switches between patterns corresponding to major warming and cooling events over the last 30 million years.

“Pulling apart the secrets hidden in these data has been fascinating and very rewarding. We are just starting to grasp how different components of the Earth System respond individually to astronomical forcing. The next step will be to understand how these components interact as a complex whole to drive our climate in the past.”

Global – regional interplay
The rate of present-day climate change is unprecedented on geological timescales. As Anna Joy notes, Earth science is essential for improving our understanding of climate change, the processes and feedbacks that drive it, and the consequences of extreme and unpredictable events.

“Some of the biggest challenges are to decipher: how different feedback mechanisms work to drive climate change on short and long timescales; how quickly the climate system can recover from major perturbations, such as the dramatic increase in carbon dioxide that we are currently experiencing; what equilibrium states Earth can exist in and what the thresholds are between these states; and what the frequency of extreme climate events are, as well as the warning signs for these.”

Recent advances in our understanding of palaeoclimate have provided detailed insights into the long-term trends and short-term variability of global climate. However, Anna Joy emphasises that we now need to better understand how regional climate is influenced by global patterns.

“Future anthropogenic climate change will be felt in different ways in different regions, so it is essential to understand the interplay between regional and global climate trends.

“CENOGRID was a great step forward in providing a continuous, highly accurate view of global climate trends and it provides a framework from which we can start to understand the regional complexities of climate.

“Additionally, the next phase of scientific oceanic drilling can hopefully capitalise on existing and ongoing technological and methodological advances and really push the boundaries of what we can get out of these expeditions.”

Anna Joy is a passionate advocate of collaborative science and open data, and helped develop the Code for Ocean Drilling Data – an open-source code for the synthesis and analysis of the diverse data that come from ocean cores.

“In addressing these challenges, we must embrace the FAIR Data Principles (Findable, Accessible, Interoperable, and Reusable), as well as open access for all. It is also crucial to ensure that our science is international and collaborative. It would be wonderful if we could develop more mechanisms to fund intercontinental teams to answer complex questions in ways that individual groups cannot do alone.”