From dirt to pay dirt 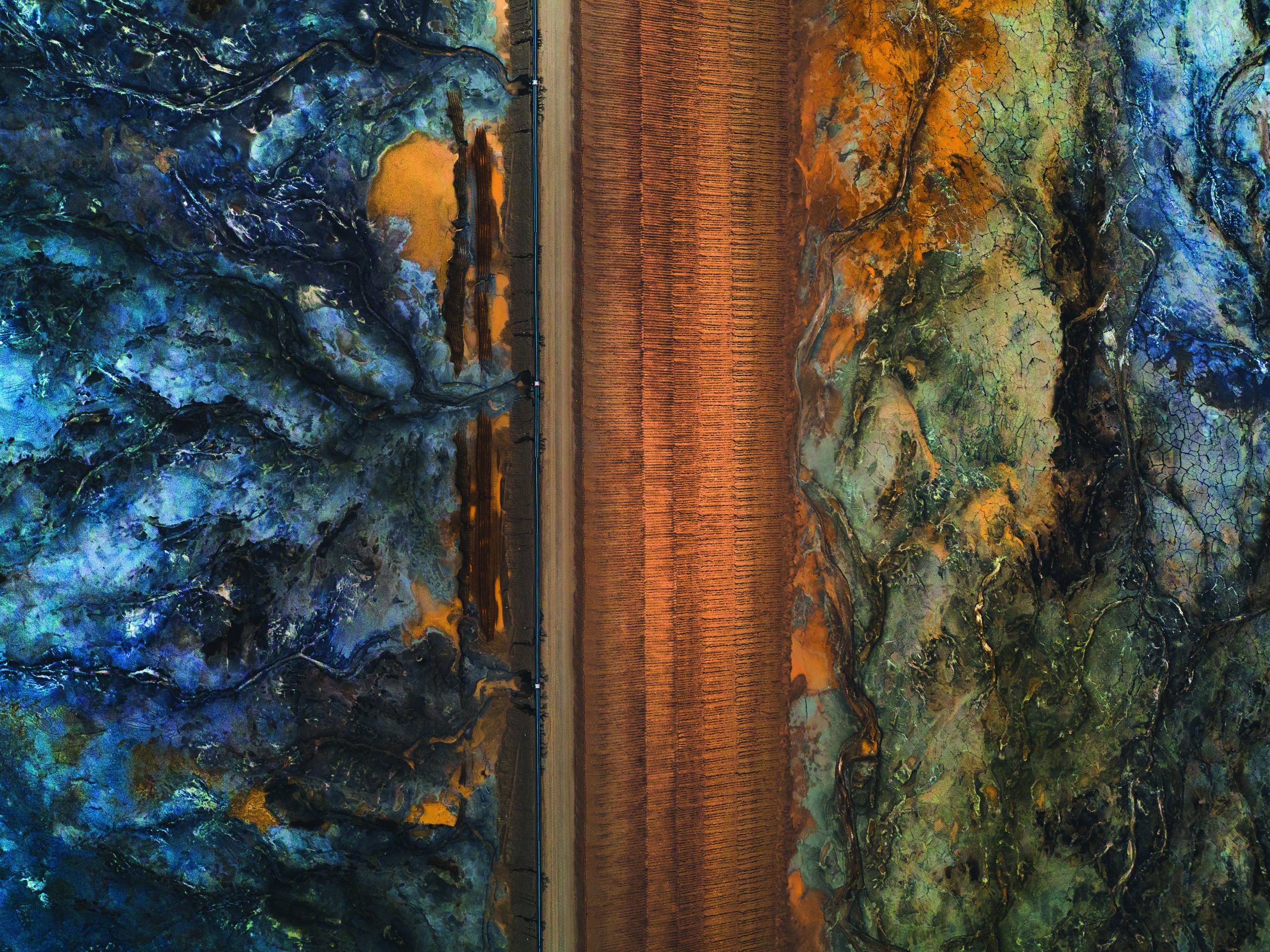 A dirt road between mine tailings at Kalgoorlie, Australia. For millennia, the extraction of gold has driven the global economy, while associated graphite-bearing rocks were dumped. But what once was just dirt, is now pay dirt as graphite becomes critical to our low-carbon future

The green energy revolution can only be achieved with a ready supply of raw materials, which necessitates the widespread mining of metals (Wilson & Edmondson, 2019; Jowitt et al., 2020). In particular, there is substantial demand for resources to make batteries, given that batteries are essential for large-scale energy storage and electric vehicles. Currently, the production of batteries is insufficient to meet the rapidly growing demand, such as for use in electric vehicles (Mills, 2021). New battery factories are being planned and constructed in many countries, and critical raw minerals will be needed on an unprecedented scale.

Current focus is on lithium-ion batteries. But, as pointed out by Elon Musk, these might be better described as nickel-graphite batteries. The demand for graphite is thus rising at an alarming rate (Fig. 1), triggering global-scale exploration over the past decade.

Well into the early years of the twentieth century, exploration for natural resources was based on a ‘where you find them’ principle, with observations of minerals at the surface leading to subsurface exploitation. With increasing demand, geologists developed conceptual models for how Earth works and exploration became focused by the predictive power of these models. This approach hasn’t been widely applied to graphite, however, because historical deposits adequately met demand. Now, with intense competition for graphite (Wang et al., 2019), the need is urgent. Progress requires companies founded in exploration for more traditional commodities, such as gold and nickel, to take a fresh look at what they already know.

From misinterpretation to success

A range of geophysical techniques is used to explore the subsurface. Electromagnetic (EM) anomalies, for example, can identify concentrations of both sulphide minerals, which typically have metals locked up inside, and graphitic carbon. Previously, the primary targets for exploration were the sulphide minerals and their associated metals, so when graphite was discovered instead, the results were a disappointment, and described as ‘confusing’ or ‘troublesome’ (Parasnis, 2014).

Now, with changing priorities, the discovery of graphite, rather than sulphides, can lead to the establishment of new companies whose business is graphite. For example, in Ontario, Zenyatta Ventures Ltd. used EM data to target nickel, copper and platinum in a terrain with no surface exposures, but drilling and the discovery of graphite instead led them to establish the Albany Graphite project (Conley & Moore, 2015). In Australia, Metallic Minerals Ltd. used EM anomalies in an attempt to target gold-bearing sulphides, but instead discovered significant graphite deposits that are now being developed by their new subsidiary company, Touchstone Resources Pty Ltd. And, in northern Sweden, EM anomalies that were initially thought by Boss Resources Ltd. to identify nickel-copper deposits, turned out to be high-grade graphite when drilled.

These fortunate misinterpretations of EM signals have been regular enough for the exploration industry to realise how valuable the technique is for finding graphite. A substantial archive of EM data from metal exploration exists, and it is often coupled with drilling data. The archive can now be revisited to identify graphitic targets and then reprocessed to better understand how the anomalies from graphite can be interpreted. It is time to take a new look at old data. 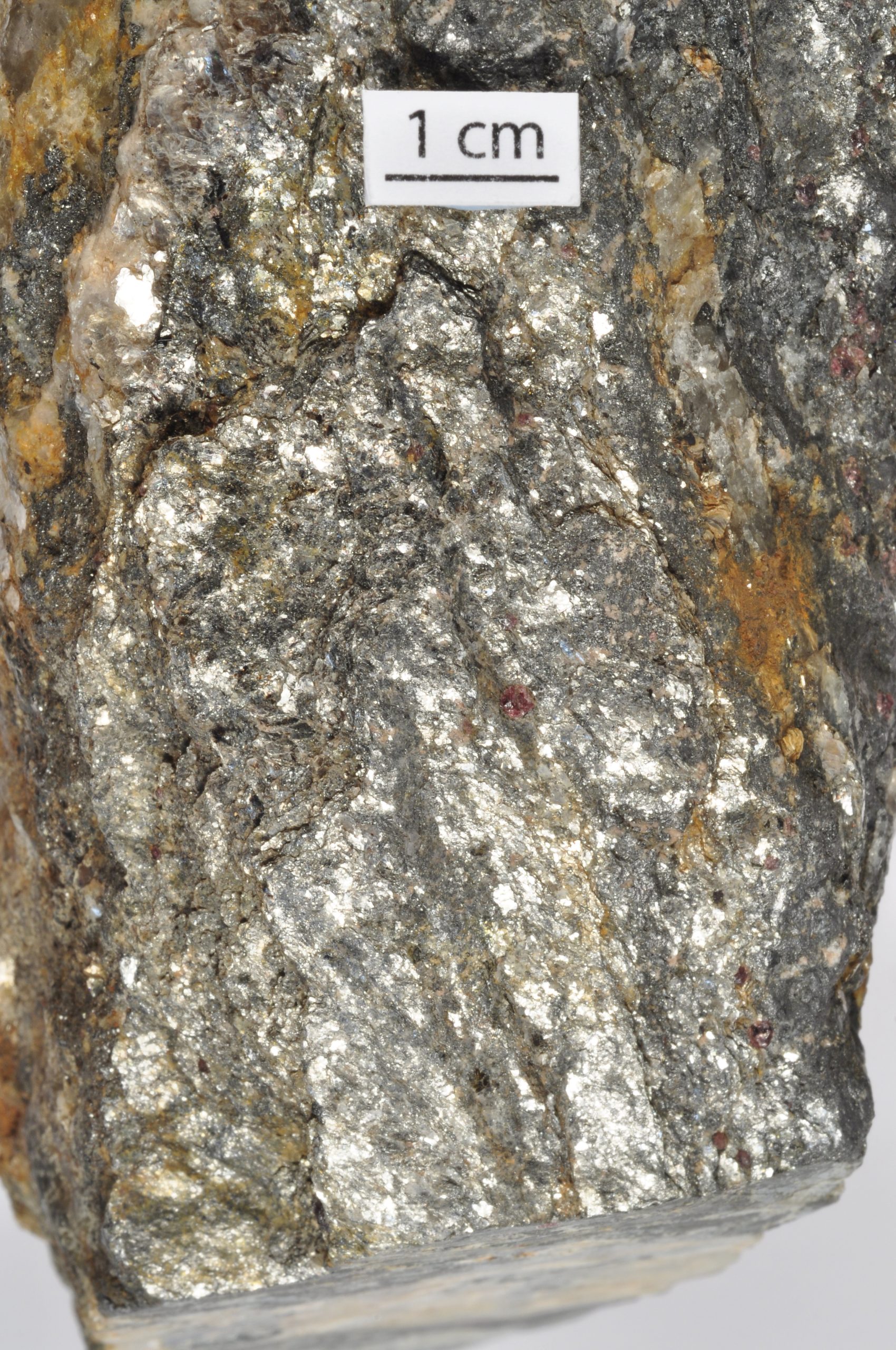 Surprisingly, given the contrasting geological environments in which they form, the distribution of nickel sulphides in Earth’s crust is related to the distribution of graphite. Nickel sulphides occur in magmatic rocks, while most graphite originates from organic remains on the ancient sea floor. However, those magmas precipitated nickel sulphides when they passed through and assimilated graphitic sediments, which were loaded with sulphur from seawater. The amount of sulphur fixed on the seafloor increases with the amount of carbon, so sulphur-rich nickel deposits and graphitic deposits may be closely associated (Parnell et al., 2021). For example, world-class nickel mines in the Thomson Nickel Belt of Manitoba, Canada, and in the Duluth Complex, Minnesota, USA, both occur in the close vicinity of graphite deposits. In Manitoba, the graphite was discovered through drilling for nickel (Callinex Mines Inc., 2014). This relationship is evident in Britain where abundant graphite occurs in nickel-mineralised Ordovician gabbro in Aberdeenshire (Parnell et al., 2020).

It is unsurprising, therefore, that exploration companies are taking out licences for both nickel and graphite on adjacent or overlapping ground (Fig. 2), with the attendant advantages of common infrastructure and flexible management. For example, in the East Kimberley region of Western Australia, between licence holdings for graphite and nickel, a third company, Fin Resources, has secured land that holds resources of both commodities (Fig. 2c). The relationship between nickel and graphite is summed up by Kibaran Nickel Ltd.’s company slogan: ‘Founded on nickel and growth through graphite’. 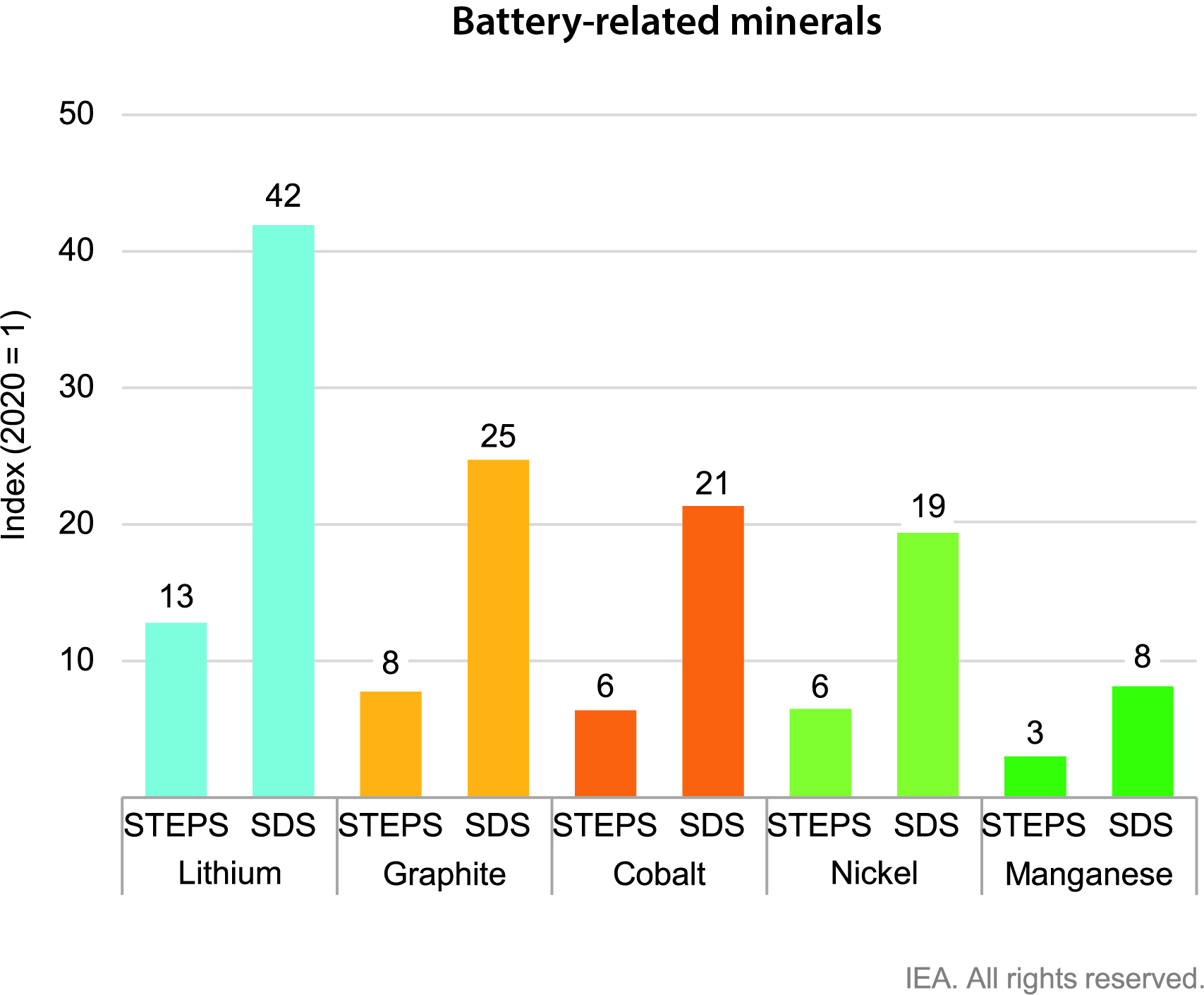 The realisation that two seemingly different materials in fact occur together has direct implications for their exploration. If nickel deposition is controlled by the occurrence of graphite, and the deposition of carbon-rich rocks on the seafloor was not uniform through time, we can expect selective distribution of both graphite and nickel through the geological record. One particular episode, following the Great Oxidation Event about two billion years ago, saw an exceptional accumulation of seafloor carbon that later became graphite and helped to precipitate many of the world’s largest nickel deposits (Parnell et al., 2021). Fortunately, rocks from that time are widely preserved despite their great age, meaning we can focus exploration on all the continents, excepting Antarctica.

Beyond serendipity
Vanadium flow batteries also offer promise as a rechargeable battery, thereby driving global exploration for vanadium (Colthorpe, 2021). As with nickel, some companies have found that they can explore for both graphite and vanadium in common or adjacent ground (Fig. 3). In Madagascar, vanadium prospects, including the Green Giant property, are surrounded by graphite resources, with both owned by Next source Materials Inc. (Scherba et al., 2018; Fig. 2). While the association of graphite and vanadium is frequently referred to as serendipitous (e.g. Nextsource Materials, 2017), other exploration companies are now reporting mixed graphite and vanadium resources (Couëslan, 2019). 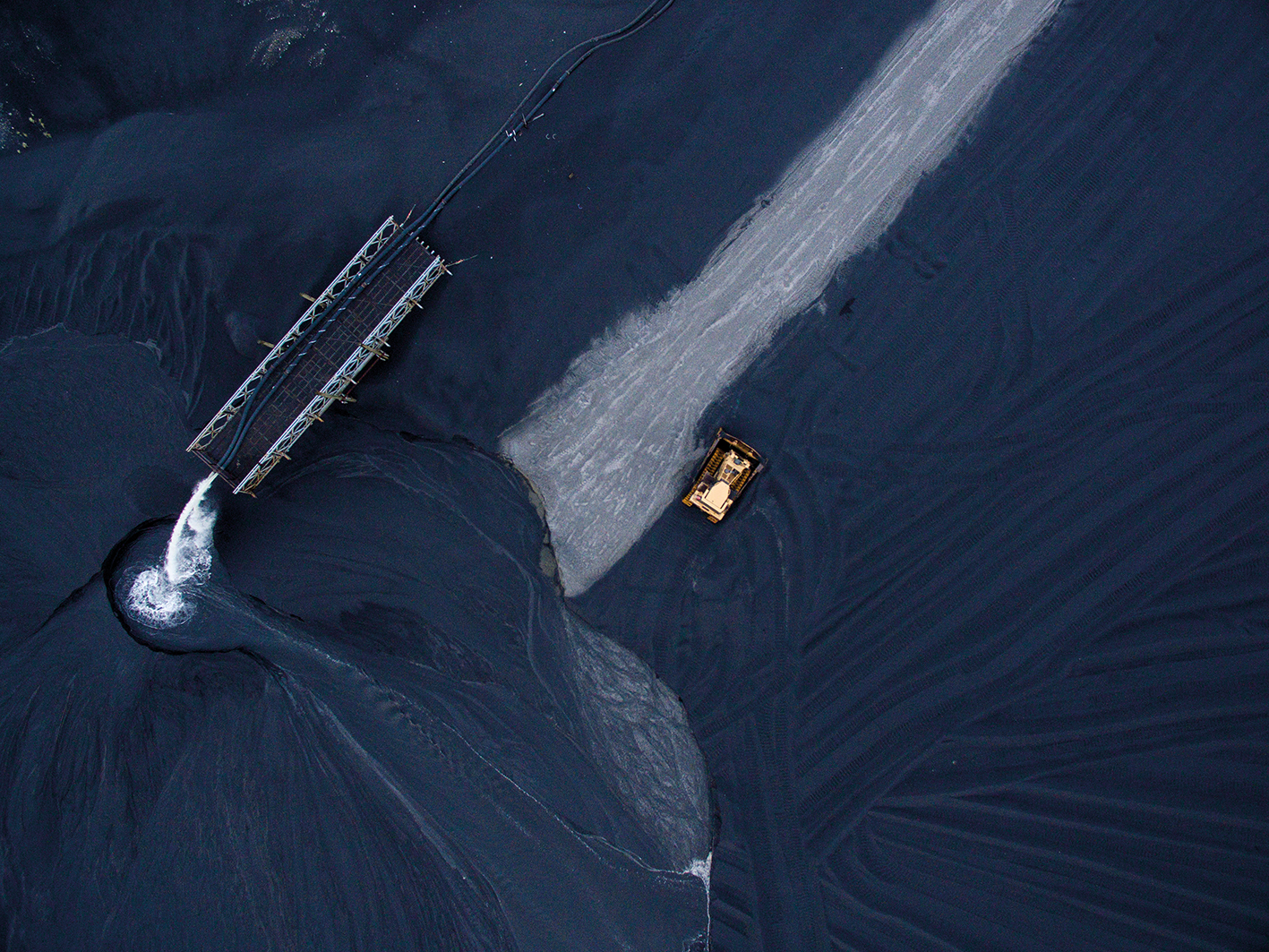 Aerial view of a slag field at the Vale Inco Manitoba nickel smelter and mine, Manitoba, Canada. World-class nickel mines in Manitoba occur in the close vicinity of graphite deposits

Figure 2: Maps of licences for mineral exploration in (A) Madagascar (Nextsource Materials Inc. 2017), (B) South Greenland (Olafsson 2021), and (C) Western Australia (Fin Resources 2020). In each country, licences for graphite exploration are closely associated with licences for exploration for gold, nickel-copper and vanadium. (Credit: J. Bowie)

When shales are buried deeply, carbon converts to graphite, and clays convert to micas, together forming graphitic micaceous schists. In sedimentary rocks, vanadium most commonly occurs as vanadium mica (the mineral roscoelite) and is hence found in the graphitic schists. The resulting roscoelite-bearing graphitic schists are a potential resource of both graphite and vanadium. In some countries, such as Kazakhstan and South Korea, the vanadium is being exploited while the graphite is not currently economic. However, in Alabama, USA (Westwater Resources Inc., 2021) and Mozambique (Syrah Resources Ltd., 2021), companies are investing in both commodities.

Joint prospects can be traced back to periods of Earth history when the seafloor was rich in both organic matter and metals, including vanadium. It is not serendipity.

Pay dirt
More exploration companies are established to find gold than any other commodity. To narrow the search for gold, companies use geological structure, metal anomalies and stream sediment surveys. Another consistent indicator of gold is graphite.

In geological settings that vary from sedimentary rocks with organic remains to granites with graphite-rich shear zones, many gold deposits are found to contain graphite. What these disparate geological environments have in common is the chemical conditions created by graphite, which prompted gold to precipitate.

For millennia, the extraction of gold has driven the global economy, while the graphite-bearing rocks were dumped. But what once was just dirt, is now pay dirt. This shift in thinking has seen, for example, the gold mining company NS Energy (2017) take up licences to exploit graphite in gold-mineralised ground in Ontario, Canada (Alper, 2017).

Funded by existing gold mining assets, numerous companies are investing in graphite development. For example, in Canada, one gold corporation entered a joint agreement to help finance new graphite explorers (Molak, 2018); West African gold producers have spun out a subsidiary company to exploit graphite in East Africa (Owen, 2021); options for Australian gold projects were sold to liberate funds for graphite exploration in Sweden (Hirtenstein, 2016); and the biggest gold prospects in Britain have supported the exploration of graphite in Greenland (Morgan, 2021). Conversely, in Mexico a graphite company is investing in gold-silver deposits (Walsh, 2020). 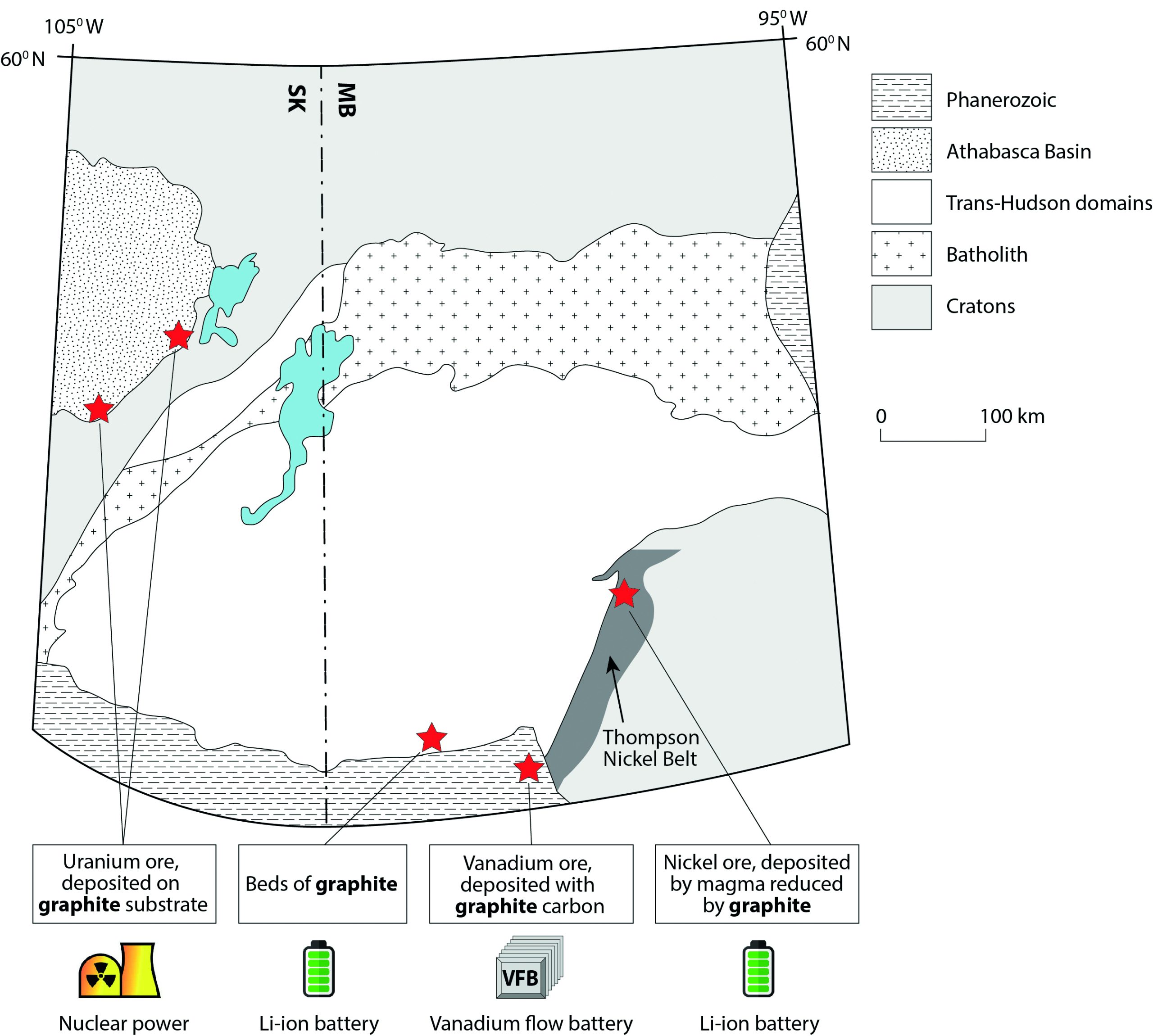 Figure 3: The border region of Manitoba (MB) and Saskatchewan (SK), Canada. Here Paleoproterozoic graphite and several ore metals whose deposition was influenced by graphite are all exploration targets. These metals and minerals have potential uses in the low-carbon economy (base map modified from Couëslan, 2019; Credit: J. Johnston)

Holistic approach
Broadly, the mineral exploration industry is shifting toward a more holistic strategy, in which the coupling of deposits is helping to support the energy transition. However, while the green energy revolution presents a number of opportunities in the natural resources sector, it is essential that this holistic approach also continues to incorporate more sustainable and responsible practices (e.g. Mudd, 2020), that sit within the broader context of recycling and the circular economy.

While past demand for metal and mineral resources has been matched by growing reserves and mine production, future supply faces a number of complexities (Mudd, 2021). As discussed by Sovacool and colleagues (2020), addressing climate change presents an ethical conundrum whereby the demand for vastly increased supplies of metal and mineral resources could exacerbate other environmental and social problems. However, if raw materials exploration and extraction is done sustainably, using tools such as the Responsible Mining Index (2020.responsibleminingindex.org/en) and platforms like the Intergovernmental Forum on Mining, Minerals, Metals and Sustainable Development (igfmining.org), a mining boom could help communities to thrive and speed up our path to achieving our climate targets.

John Parnell is Professor of Geology and Petroleum Geology, Centre for Energy Transition, School of Geosciences, University of Aberdeen, UK.

John Parnell has no relationships with any mineral exploration company. The discussion presented in this article is based on publicly available information and the peer-reviewed literature.