Jennifer Scoular and colleagues report on the InSAR revolution in geoengineering, which is transforming detection of ground deformations in both urban and rural areas

Ground surface deformation is now routinely measured to millimetric precision using a family of remote sensing techniques known as Interferometric Synthetic Aperture Radar (InSAR; see boxes ‘What is InSAR’ and ‘What is interferometry’). The possibilities of InSAR first came to the attention of the wider scientific community when an interferogram showing ground movement caused by the 1992 earthquake in Landers, California, appeared on the front cover of Nature (Massonnet et al. 1993). That image was made using data from ERS-1, the first European Space Agency SAR satellite. Since then, multiple generations of SAR satellites have followed, offering improvements in temporal and spatial resolution, and opening a diverse range of applications. Here, we discuss some of those applications, using case studies ranging from central London, to rural Wales and the south coast.

Over the last decade or so, InSAR has gained recognition within the civil engineering community as a powerful and cost-effective tool for detecting and monitoring ground deformation above tunnelling projects, particularly in urban areas. In London, its use gained recognition following the construction of the Jubilee Line Extension (1993 to 1999) and later during the Crossrail project, where tunnelling took place between May 2012 and May 2015, when clear settlement troughs were revealed. In the case of Crossrail, this was as a roughly east-west oriented ‘string’ of subsiding areas across central London (Bischoff et al. 2019).

InSAR can also be a valuable tool for engineering geologists to interpret ground conditions during the desk study phase of a project. After a decade of research, largely enabled by the British Geological Survey OpenGeoscience service (www.bgs.ac.uk/geological-data/opengeoscience/) and supported by major infrastructure projects, it has been shown that London’s subsurface is far more complex than previously recognised and contains multiple geotechnical hazards, which can cause significant risks for engineering projects.

These hazards include faulting, sand channels, drift filled hollows (DFH) and shrink-swell behaviour within the London Clay (Scoular et al. 2019). DFHs or ‘buried hollows’ are steep-sided depressions in the rockhead surface, caused by a complex interplay of natural processes (e.g. Toms et al. 2016). Up to 75 m deep and 90 to 475 m wide, they are typically infilled with sand and gravel. London’s dense urban fabric makes investigation and mapping of geohazards very challenging and thus new (previously unknown) DHFs are often revealed by site investigations or, in worst-case, are encountered during tunnelling and construction. 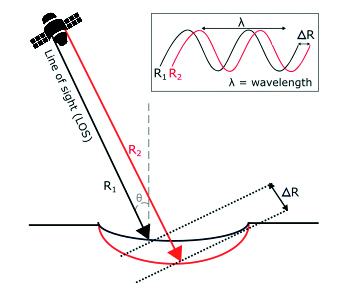 Spotting geohazards
InSAR could potentially be used to identify these geohazards prior to construction. For example, the presence of a DFH was confirmed through the use of InSAR at Newham Hospital in East London. The DFH was first encountered during construction of the Lee Tunnel, part of the Thames Tideway ‘super-sewer’ project. Retrospective use of InSAR showed that localised subsidence on the eastern edge of the hospital can be observed as far back as 1992 (when the earliest InSAR data became available) (Scoular et al. 2020). The localised subsidence coincides with a DFH that was confirmed in borehole investigations (Fig. 2).

Figure 2: (a) Map showing the location of profile A (West) to A’ (East) and Persistent Scatterers point distribution at Newham Hospital. (b) Profile A-A’ showing variable subsidence over the time period 2010 to 2015, with greatest displacement to the east of the hospital building and in the car park (blue rectangle)

The presence of faults can also be revealed using InSAR, often through the effect of changing groundwater levels, due to their ability to act as a barrier to flow. Dewatering in East London for Crossrail’s Limmo Shaft produced a subsidence bowl, which appears truncated at its western edge (Bischoff et al. 2019). The strike-slip Lee Valley Fault is interpreted to have impeded aquifer connectivity, and therefore settlement during dewatering (Fig. 3).

On a broader scale, the geometric arrangement of London’s fault network is also evidenced by separating the east-west and vertical components of PSI measurements (Mason et al. 2015). London’s surface can be seen to move as a series of discrete blocks, coincident with major elevational changes in the chalk subsurface. Morgan et al. (2020) correlate these two independent lines of evidence to provide indirect evidence of faulting (Fig. 4).

Figure 3: (a) Settlement due to dewatering for Crossrail at the Limmo Peninsula, East London. (b) Heave following the cessation of dewatering. Truncation of the area of deformation to the west is interpreted as a fault. Modified from Bischoff et al. Q. J. Eng. Geol. Hydrogeol. (2019); http://dx.doi.org/10.1144/qjegh2018-075 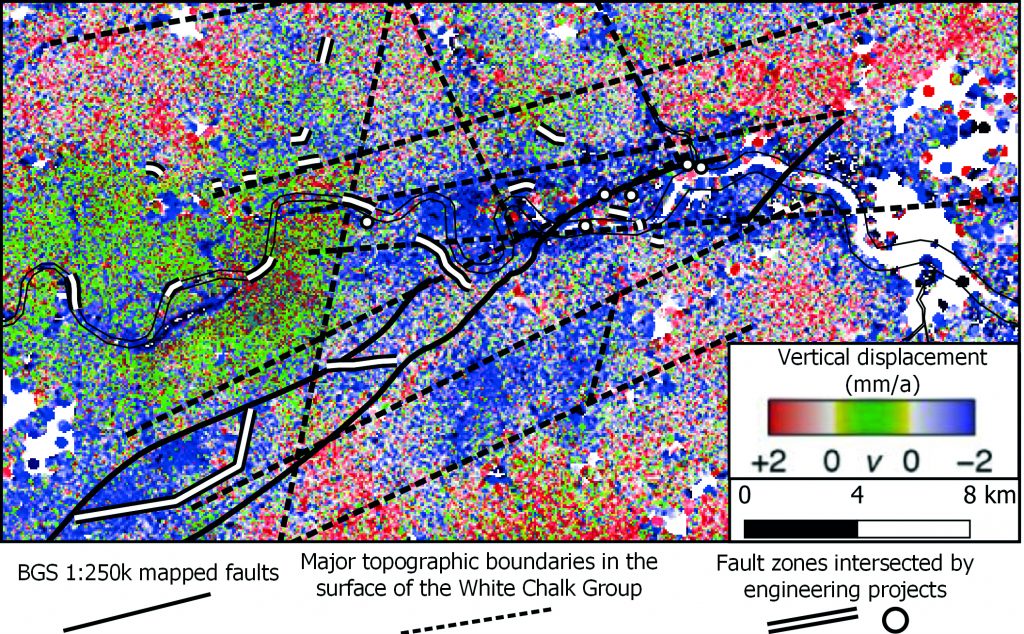 InSAR in rural areas
Until recently, applications of InSAR in rural settings have been limited to within semi-arid regions. Regular variation in soil moisture contents and vegetative land cover can obscure deformation measurements in more temperate regions such as the UK, often leading to noisy and unreliable results. More recently, rural results have been drastically improved through careful processing of ‘Distributed Scatterers’ (DS). DS are contiguous clusters of points that individually behave more noisily than PS, yet accurate measurements of deformation can be achieved by statistically analysing and filtering these DS as a collective.

An example of deformation in a rural mining area is at Ffos-y-fran opencast coal mine in south Wales. The western side of the pit had undergone significant reclamation works prior to the measurement period, and in figure 5 widespread settlement of backfill material can be observed. Similar magnitudes of movement can be seen from the large spoil heaps to the east of the mine. The northernmost heap has a steep west-facing slope, which appears to be moving towards the satellite (blue), indicating material is moving downslope.

The remaining areas of the spoil heap are all measured as moving away from the sensor, indicating settlement or material moving down east-facing slopes. 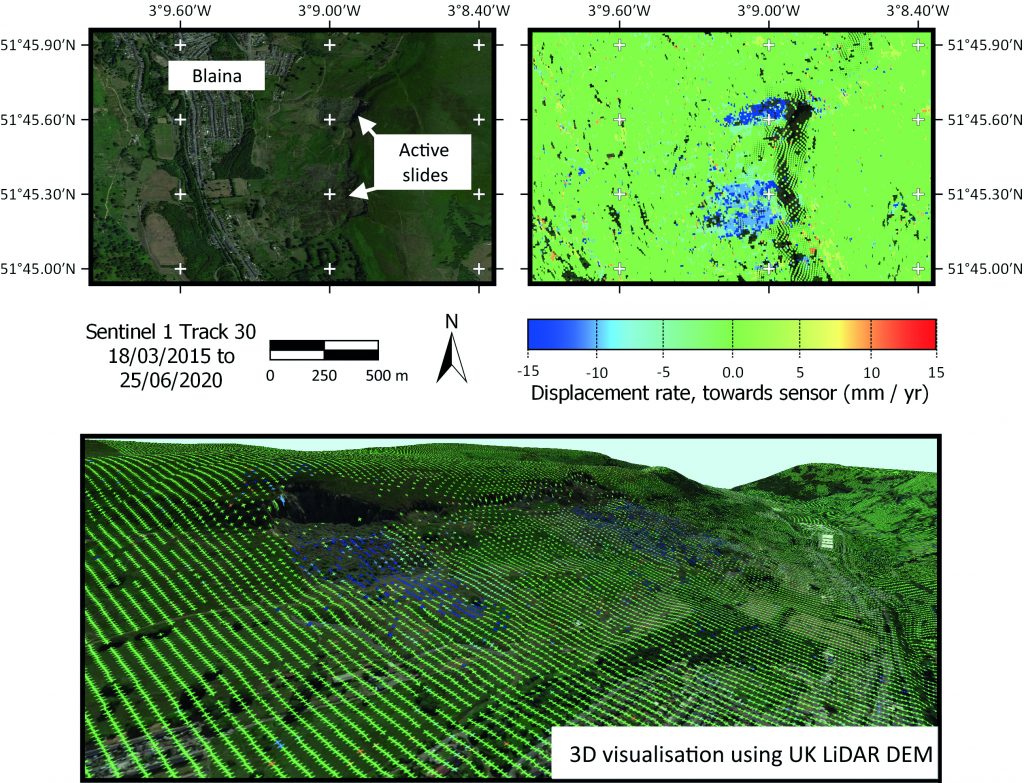 Bespoke software
These new DS techniques are used in bespoke software, such as ICSAR (developed at Imperial College London) and SqueeSAR™ (developed by TRE ALTAMIRA, Ferretti et al. 2011), to provide many more measurement points in rural areas. These could potentially unlock new and exciting opportunities for the use of InSAR. The improving rural InSAR performance offers the potential for accurate monitoring of geohazards and landform evolution, including active and historical mining; assessment of slope stability and subsidence risks; the effects of remediation and land reclamation works; and ‘baselining’ other ground deformation phenomena at project sites. For example, figure 6 shows the InSAR results for a landslide close to Blaina in Wales, where the ground is moving down the west-facing slope at 10-15 mm/yr.

Landslides in coastal areas can also be monitored with InSAR. Cow Gap (Fig. 7a) is an area of chalk cliffs south-west of Eastbourne, East Sussex (UK). The cliffs are part of an active rotational landslide, approximately 1,000 m in length and 200 m in width. The shore platform and cliffs are exposed to coastal processes and erosion.

Although ESA’s Sentinel-1 images are acquired at the same local time every day, tide times are variable and the radar cannot penetrate water. The scenes can therefore be filtered to include only those acquired within a two-hour window of low tide, when the shore platform is exposed and can be measured. The platform movements shown in figure 7 have been interpreted as the main body of the landslide moving downwards at about -9 mm/yr (Fig. 7b), and the toe of the landslide moving upwards at about +0.7 mm/yr (Fig. 7c). Some of the downward movement in figure 7b may be attributed to platform downwearing, but, results from other parts of the cliff demonstrate that this process is unlikely to cause more than a few millimetres of erosion over the time period of this study (Mider et al. 2020). 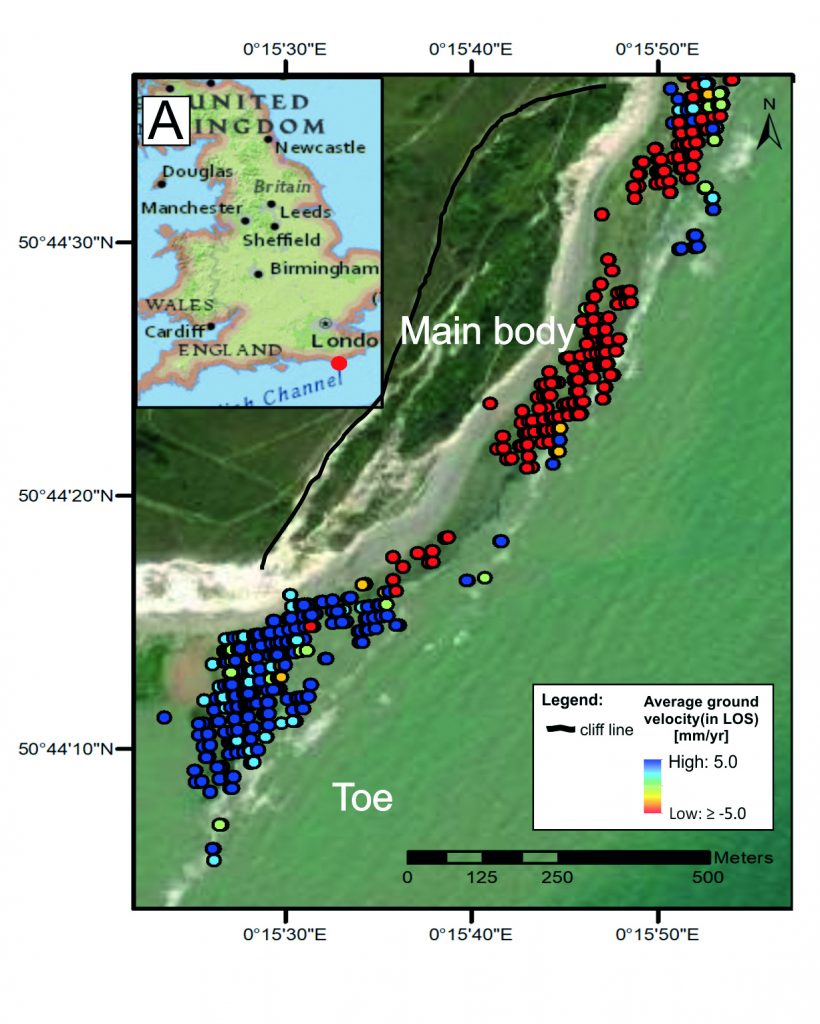 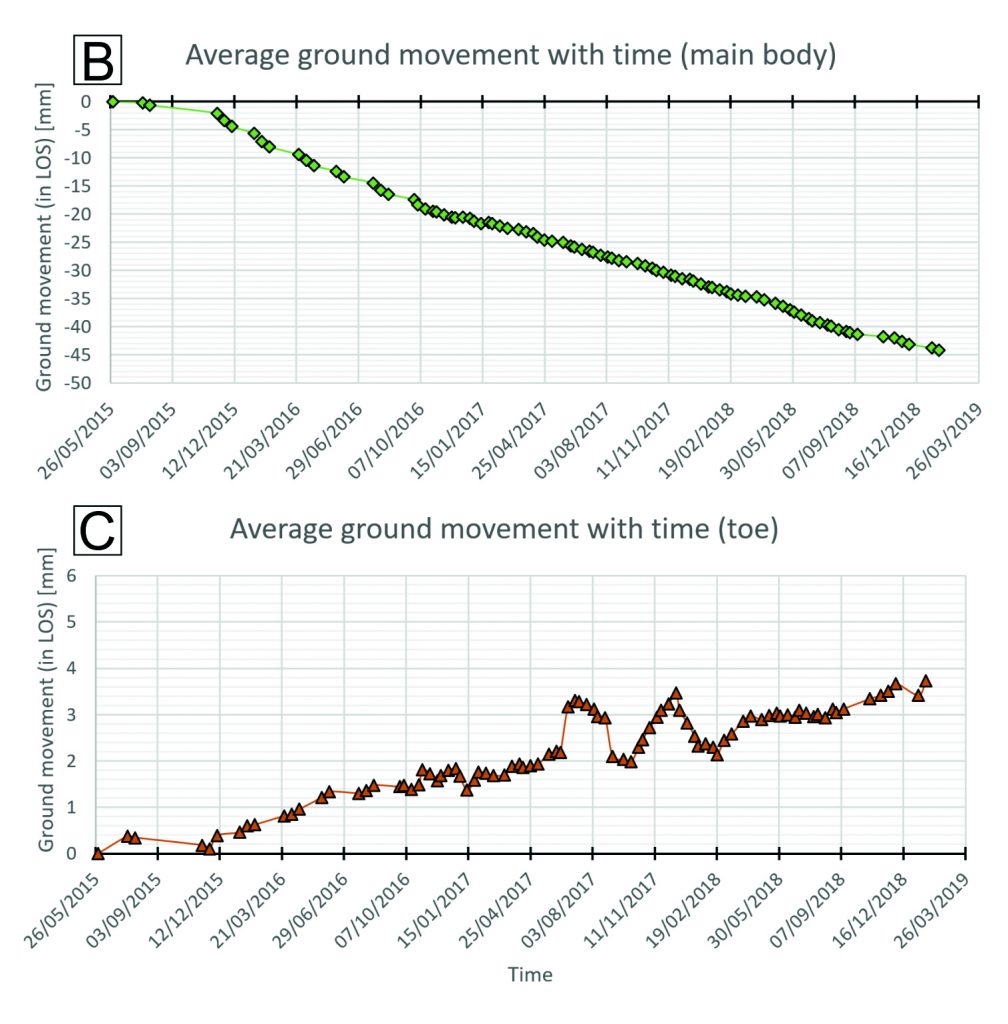 Figure 7: (a) Aerial view of Cow Gap rotational landslide with PS points overlayed, coloured by average velocity (blue = up, red = down). (b) and (c) are PS time series for the main body and toe of the landslide respectively. Analysis by Gosia Mider

Future of InSAR
InSAR technology started out as a research tool for seismic geohazards, but it has been developed and expanded into volcanic hazards, oil and gas, carbon sequestration, mining and now into engineering geology. As temporal resolutions improve with new satellite constellations, from every 35 days with ERS-1 in 1992 to every six days with Sentinels -1A & -1B, along with spatial resolution (X-band constellations) and with increasing ease of data access, the applications for InSAR keep growing. Recently launched and planned commercial small satellite constellations, such as ICEYE and Capella Space, will offer hourly revisit times and sub-metre resolution.

New platforms for radars are also under development. Small unmanned aerial vehicles (UAVs) were traditionally associated with the defence industry, but recent technological developments, reduced costs and improved capabilities have seen their popularity dramatically increase. Ongoing research at Imperial College London involves development of UAVs as low-altitude radar platforms, providing the potential for UAV-borne InSAR. UAV-borne radar would bring improved temporal and spatial resolutions, and the potential for higher frequency signals, due to reduced atmospheric signal attenuation that comes with lower altitudes. However, new signal processing and adjustments to InSAR methodologies will be needed to account for variations in UAV flight path on repeat visits and GPS precisions.

This Feature links to the Science Snapshot Expanding horizons

The work presented here was carried out by the Engineering Scale Geology Research Group (ESGRG), a multidisciplinary team at Imperial College London and Royal Holloway, University of London.  ESGRG are currently writing the Construction Industry Research and Information Association (CIRIA) guidelines on ‘Earth observation and InSAR technology for civil infrastructure’ in collaboration with Sixense.

The authors would like to thank TRE Altamira and CGG for providing data used in these case studies. Further thanks to our collaborators and funders: Thames Tideway East, Radioactive Waste Management, Brighton and Hove Council, EPSRC, Imperial College Skempton Award and Ground Evolution Monitoring and the other members of the ESGRG.