Nick Davidson walks in the footsteps of Charles Lapworth, an elusive figure who helped revolutionise our understanding of early Earth

I arrived in the small town of Galashiels in the Scottish borders on a late autumn afternoon, as the sun dipped behind the surrounding hills and a chill spread over the empty high street. This was once a hard-working factory town where the soft waters of the River Gala washed the wool and powered the looms of a thriving textile industry. But, in the 1980s, one factory after another fell victim to cheap imports, ripping the heart out of the community and leaving an air of faded glory.

I had come to trace the fieldwork of one of the most important geologists of the 19th Century. For 11 years, Charles Lapworth lived in Galashiels, during which time he astonished Britain’s scientific community and rewrote our understanding of the early history of Earth. A handsome 16th Century ‘gentleman’s residence’, now home to a small museum devoted to local history, seemed a good place to ‘meet’ him, but to my surprise, Lapworth doesn’t get a mention. It would become a reoccurring theme: for somebody now regarded as one of Britain’s most significant geologists, Lapworth is a remarkably under-recognised figure. 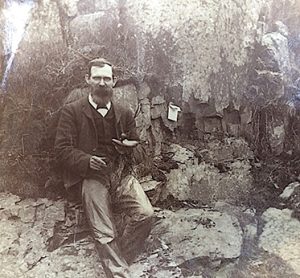 Lapworth was in his twenties when he arrived in Galashiels in the early 1860s as a school teacher. He was bright and curious about the natural world and, as he explored the rounded hills that ring the town, he struck up friendships with local geologists who were surveying the region and discussing the great debates swirling through the geological community. One dominated their conversation: the so-called Cambrian–Silurian controversy.

An acrimonious dispute between two of the country’s leading geologists – Adam Sedgwick and Roderick Murchison – had split the scientific world and brought geological investigation in Britain to a virtual standstill.

The problem centred on how to make sense of the ancient strata that lay across Scotland, Wales and upland areas like the Lake District: a chaotic jumble of rocks lumped together in a holdall category known as the Greywacke – an Anglicisation of a German mining term ‘Grauwacke’, meaning grey, earthy, muddy rock.

Sedgwick, a brilliant but erratic Cambridge University professor, had devoted 30 years to exploring the hills of north Wales and the Lake District and, despite the tangle of slates, sandstones and volcanic lavas that run across the region, had identified an apparently coherant sequence of strata that appeared to date back to the earliest origins of Earth. He called it the Cambrian after the Roman word for Wales.

Meanwhile Murchison, an ambitious and wealthy retired soldier and self-taught geologist, had toured the sandstone and limestone hills of southern Wales and the Welsh border country and identified a slightly younger sequence of strata that seemed to lie immediately above the Cambrian. He called them the Silurian after a Celtic tribe that once lived on the Welsh borders.

There was only one problem. The two men couldn’t agree on where to draw the boundary between their two systems: where did the Cambrian finish and the Silurian begin? The dispute turned into a bitter and personal rivalry, each man claiming the lion’s share of the Greywacke for his own. Sedgwick accused Murchison of falsehood; Murchison suggested Sedgwick was growing senile. The geological community divided and took sides. By the mid 1850s, the two men were no longer talking to each other and the Geological Society banned further discussion of the topic as simply too explosive.

Lapworth was intrigued: could the solution to the most public controversy in British science lie somewhere beneath his feet?

As I toured the Galashiel hills, autumn was advancing and the trees were turning red and gold. Millions of years of erosion have smoothed and rounded the contours, and there are few natural outcrops of bare rock. But, just off the sinewy Galashiels-to-Moffatt road, as it descends to the valley of the Moffat Water through stands of mountain ash scarlet with berries, there’s a remote shepherd’s cottage at a place called Birkhill. Immediately to the north, across a gently descending slope of purple heather, there’s a gash in the hills where the upper waters of the Moffat have cut deep into the rock, exposing the underlying strata. It’s known as Dob’s Linn: one of the few extensive sections of naturally exposed rock in southern Scotland.

Here in the 1870s, against all the odds, Lapworth, together with his friend James Wilson, a local journalist, uncovered an entirely new geological period – and in doing so solved the Cambrian–Silurian controversy. 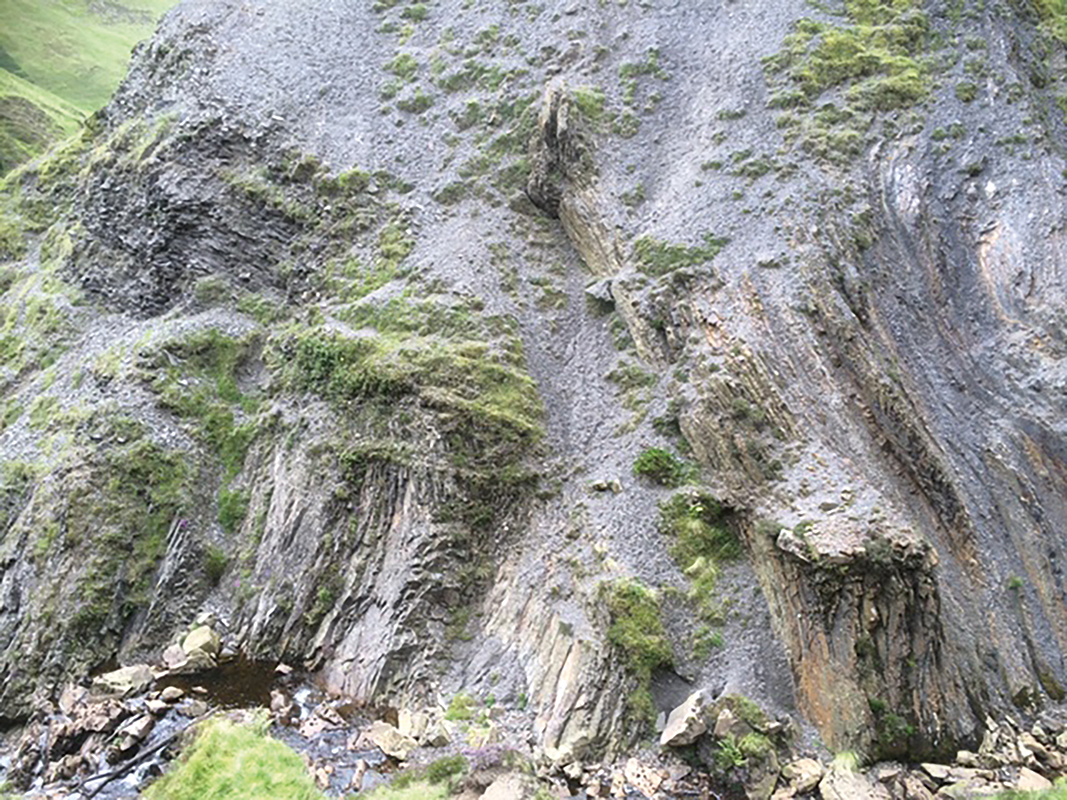 Dozens of narrow bands of strata appear to dive vertically into the ground at Dob’s Linn (Image credit: © Nick Davidson)

The rocks of the Scottish borders are not easy to read. Bands of paper thin strata, dip, dive and splinter, making it almost impossible to determine the relationship between them. Lapworth despaired: any attempt ‘to ascertain their interrelationship by lithological and stratigraphical evidence has soon to be abandoned as hopeless’, he complained despondently in 1871.

The dispute turned into a bitter rivalry, each man claiming the lion’s share of the Greywacke for his own

There was also an almost complete absence of the well-established fossil species – trilobites, crinoids and brachiopods – commonly used to identify and distinguish Greywacke strata. As a result, Lapworth was forced to use the little-understood family of plankton-like creatures known as graptolites: creatures that bear a striking resemblance to grafitti scratched in the rock, hence their name; graptos, from the Greek for ‘written’ and lithos, meaning ‘rock’. They appear as a random collection of tiny spirals, miniature curved saw blades and serrated fish hooks about the size and thickness of a finger nail. Some geologists doubted they were fossils at all. Methodically, week after week, Lapworth and Wilson scrambled their way up one side of Dob’s Linn and down the other, crawling over razer sharp bands of shale and mudstone on their hands and knees, digging out the tiny graptolite remains.

To make the task easier, Lapworth devised, with the help of his wife Janet, what he called his ‘geological waist coat’, a jerkin with a series of pockets down each front panel into which he carefully put his often minute and delicate specimens. After a day’s work, back at their camp in the cottage at Birkhill, over a sparten diet of mostly porridge, Lapworth, Wilson, and probably Janet, unpacked and identified the specimens, recording on large-scale, hand-drawn, maps of the gorge the exact location where each graptolite had been found.

It must have seemed, at times, a hopeless task. One summer gave way to another, for six successive years. But, gradually a barely discernible pattern began to emerge: each bed of strata could be broken down into exactly the same three sub-divisions, each identified by its unique combination of graptolites. A top band of mudstone, siltstone and black shale, Lapworth called the Birkhill Shale; a middle band of grey and black cherty shales he called the Hartfell Shale; and a bottom band of black cherty shale he called the Glenkiln Shale.

Lapworth named it the Moffat Series after the local river. It was immediately apparent that rather than being composed of hundreds of different strata, the region’s geology was instead composed of one single stratum, bent and doubled over time and again. An apparently complex structure was actually quite simple.

Equally importantly, Lapworth found that the Birkhill Shale contained an entirely different range of graptolites to those in the Lower Hartfell and Glenkiln Shales. Not a single family of these strange creatures crossed the boundary – there was a complete break in the fossil record.

Geological revolution
The wider geological community was intrigued. This was a remarkable piece of field work from an almost unknown provincial geologist. But it was Lapworth’s next move that stunned geologists across the world. In 1879, in the words of friend and colleague, William Watts, he ‘tactfully and modestly’ stepped into the dispute between Sedgwick and Murchison, lining up his three graptolite zones with the disputed boundary between the Cambrian and Silurian Systems. The result was a bombshell.

Lapworth, revisiting Murchison’s division with new eyes, arrived at a startlingly different conclusion. His top graptolite zone of Birkhill Shale neatly matched Murchison’s Upper Silurian rocks: his second two graptolite zones, the Hartfell and Glenkiln Shales, were clearly similar to the Lower Silurian strata. But, according to the graptolite evidence, there was a break in the fossil record between the upper and lower Silurian sequences, a break so fundamental that it could only have occurred if there had been a major change in environmental conditions on Earth. Furthermore, there was an equally dramatic break in the fossil record between the Hartfell and Glenkiln Shales, and Sedgwick’s Cambrian rocks below.

The implications were profound. Not only was this a significant challenge to the coherance of Murchison’s Silurian System, but if the Hertfell and Glenkiln Shales shared a unique fossil fauna that was entirely different from the rocks above and below them, then they logically represented an entirely new and discrete geological period that nobody had noticed until now. 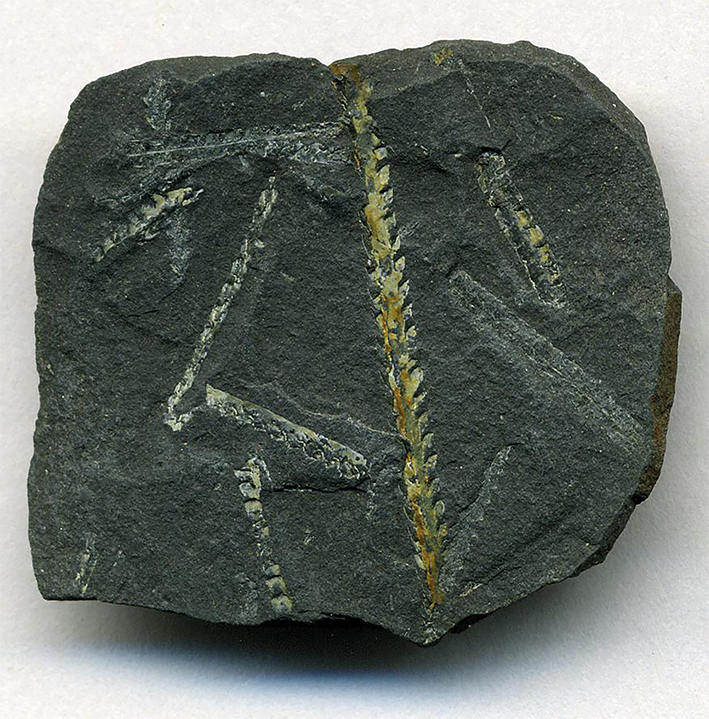 Lapworth’s data called for a major revision of the established understanding of Earth’s early rocks and finally explained why Sedgwick and Murchison had been unable to resolve the boundary between their two systems. They had completely missed a third geological period that lay between them. It was a geological revolution.

Lapworth called this new period the Ordovician after the last Roman-British tribe to inhabit northwest Wales. Many of the geological establishment, however, found it impossible to accept and it would take another 20 years before the British Geological Survey could be persuaded to recognise the Ordovician as a legitimate geological period and a further 60 before it was acknowledged by the International Commission on Stratigraphy.

Understated acknowledgement
Today, the Ordovician is accepted as a discrete period of some 52 million years of Earth’s history during which there was an important increase in marine species, before 85% of them were wiped out in what was probably a major glaciation at the beginning of the Silurian.

And in recognition of Lapworth’s achievement, a plaque on the wall of the cottage at Birkhill announces: ‘Birkhill Cottage where between 1872 and 1877 Charles Lapworth recognised the value of graptolites as a clue to the Geological Structure of these hills’. Charles Lapworth may have been forgotten in Galashiels, but his memory lives on in the vast expanse of the Border hills.

Author
Nick Davidson is a writer and documentary film maker. Read the review of his most recent book, The Greywacke: How a Priest, a Soldier and a School Teacher Uncovered 300 Million Years of History. 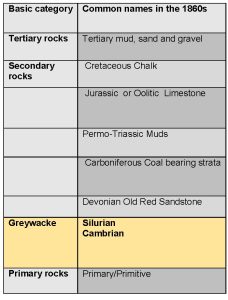 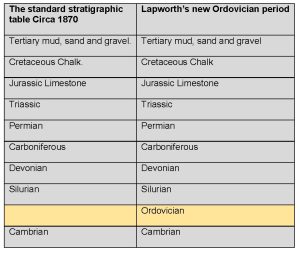 A comparison of the stratigraphic table according to Murchison, Sedgwick and Lapworth (circa 1879)