In Summer 2020, Council requested an assessment of the Geological Society of London’s historical links to slavery and colonialism. The Society’s Archivist, Caroline Lam, researched those links and reports the findings here

Mount Taranaki, New Zealand. Artists and surveyors of the 1800s depicted the country’s landscapes through a colonial lens

The harrowing deaths of George Floyd and Breonna Taylor in the United States, and the subsequent rise of the Black Lives Matter movement profoundly affected much of society last summer. One of the most notable outcomes has been organisations, such as our own, investigating the extent of links to imperialism, slavery and racism in their past.

The evidence for many of these connections is usually found by surveying institutions’ historical collections, and curators, archivists and librarians are at the forefront of the movement to ‘decolonise’ the more problematic material. Decolonise is a catch-all term to indicate attempts to negate centuries of colonial or imperialistic origins and attitudes that are manifested in historical academic studies and collections. Although the geographical scope of the Society’s collection is wide, there is a distinct lack of diversity in the individuals who created them. The Society’s membership from the first was not diverse. After decades of campaigning, women were finally allowed to join in May 1919 but, as was found in the 2020 Geological Society of London Strategic Options project, the science and ergo the membership to this day continues to display a lack of diversity. The collections are a reflection of this.

Colonial links
Most of the collections cover the geology of Britain and Europe, but there is much coverage farther afield, including material derived as a result of European colonialist practices of the 19th and 20th centuries. Britain was, of course, at the forefront of imperialist expansion and, while Fellows of the Society participated in these activities, for instance as surveyors on an expedition or colonial survey, the Geological Society (unlike, say, the Royal Geographical Society) as a body was not involved in the organisation or funding of these. However, as experts in the field, the Society was frequently asked for recommendations on geological appointments. Employing a geologist would enable exploratory expeditions to survey areas for mineral wealth to be exploited by the imperialist agency’s home nation.

The Society’s collection of maps and images are rare records of areas before they were obscured or destroyed by colonial construction and industrialisation, much of which do not survive elsewhere. Traditionally there has been a tendency to describe these regions as having been ‘discovered’ by a member of a colonial exploration trip. Of course, the indigenous populace of a country would know all too well of an area’s existence and may have, in many cases, acted as guides.

Artist and colonial surveyor Charles Heaphy (1820-1881) arrived in New Zealand in August 1839, initially as draughtsman in the employ of the New Zealand Company. This was a commercial enterprise whose remit was to systematically (and socially engineer) the colonisation of New Zealand. Heaphy’s role was to produce idyllic images of the landscape to tempt Europeans to emigrate (Fig. 1). In his exploration of the country, Heaphy is known to have employed Maori guides, two of whom, Kehu and Tau, saved his group from starvation during a trip down the west coast in 1846. 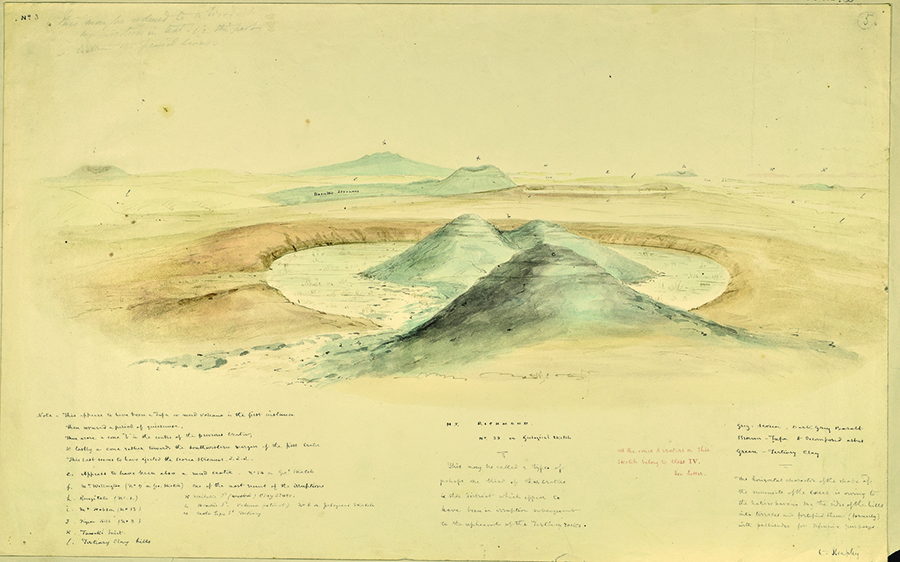 Figure 1: ‘Mount Richmond’, one of a series of watercolour views of the volcanic region around Auckland, New Zealand, by Charles Heaphy. He wasn’t a Fellow of the Geological Society of London, but was one of a number colonial surveyors who sent the results of their geological research to the Society for publication in our journals. (Archive ref: LDGSL/209; reproduced courtesy of the Geological Society of London)

Colonial era images frequently depict the land as empty. The invisibility of the indigenous population and their culture to modern eyes seems shocking, but it is a stark illustration of the nature of imperialistic land acquisition that continues to this day.

Slavery
Slavery was abolished in Britain in 1807, the same year that the Geological Society of London was founded. This significant milestone is largely credited to the vociferous campaign led by the Quakers. Three of the founders of the Geological Society were Quakers – the brothers William Phillips (1773-1828) and Richard Phillips (1778-1851), whose father James helped establish the Society for the Abolition of the Slave Trade in 1787, and the chemist William Allen (1770-1843), who devoted much of his later life attempting to abolish slavery worldwide. 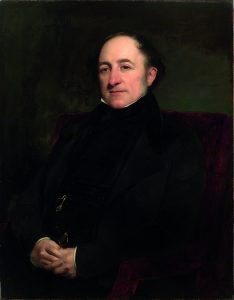 Yet, slavery was only outlawed on British soil. It continued elsewhere in the Empire, notably in the colonial outpost of the British West Indies. One of the most prominent early Geological Society members with holdings there was Sir Henry De la Beche (1796-1855; Fig. 2) who later became the first Director of the British Geological Survey. De la Beche had inherited slave (sugar) plantations in Clarendon, Jamaica, from his father, but falling revenue due to the frequent slave revolts in the region led him to travel there between 1823 and 1824. It was during this trip that he undertook the research for the first geological map of Jamaica (Fig. 3). 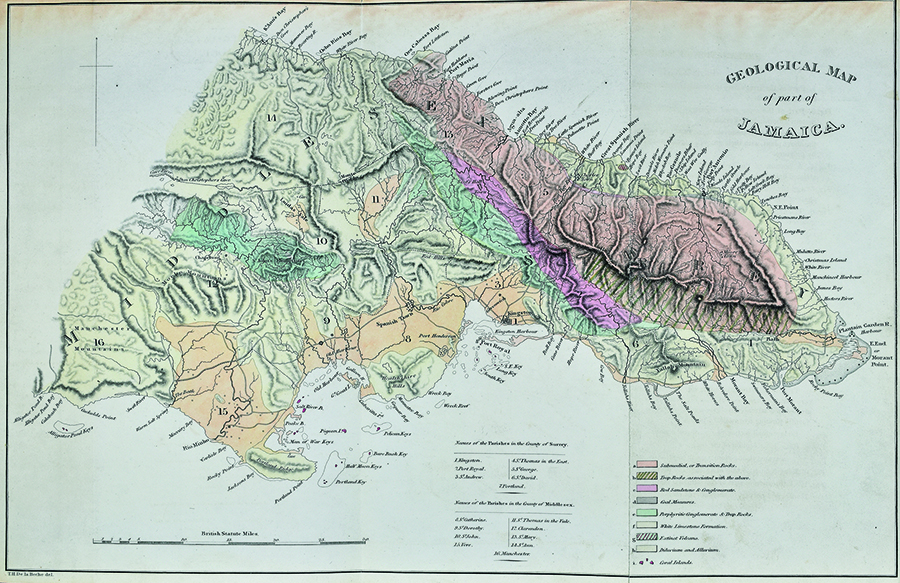 Figure 3: Geological of Map of Jamaica by Henry De la Beche, 1827 (published in the paper: ‘Remarks on the Geology of Jamaica. Transactions of the Geological Society of London’ 2(2), 43-192). This is the first geological map of Jamaica, hence why De la Beche is sometimes referred to as the ‘Father of Jamaican Geology’. The research for it and the accompanying survey was undertaken between 1823 and 1824, when De la Beche was visiting his slave plantations on the island

In 1825, De la Beche published a pamphlet, Notes on the Present Condition of the Negroes, which was issued as part of the pro/anti abolitionist literature and debates that were circulating during this time. Despite being a slave owner, De la Beche held anti-slavery views, but his income was entirely reliant on his Jamaican estate. The volume is essentially an account of his attempt at a compromise, that is to institute a more ‘humane’ approach to the treatment of the slaves on his plantations.

The almost pastoral view of the conditions of the enslaved populace of Jamaica depicted in the publication was clearly at odds with the reality as unrest on the island continued. The ‘Great Jamaican Slave Revolt’ of 1831-1832 was its culmination. This major rebellion and its brutal fall out accelerated the British Government’s decision to abolish slavery in the British West Indies in 1833. The British Government paid compensation, not to the slaves but to the plantation owners, but by this time De la Beche had mortgaged his properties to the Hibbert family who received the money instead.

De la Beche was by no means the only Fellow whose economic situation was bound up with Britain’s nationally sponsored slave trade. Sir Roderick Murchison’s (1792-1871) maternal family had slave holdings in the West Indies, as did the father and brother of the physician Richard Bright (1789-1858). Even the staunch abolitionist Adam Sedgwick (1785-1873) appears to have benefited financially through a bequest from a slave-owning neighbour in Dent, Yorkshire. Within the historical Fellowship lists are likely to be more, including those with connections to the East India Company. This organisation was not only involved in the slave trade in Africa, but with the imperial invasion of India and the opium trade with China.

Racism and prejudice
As to be expected with a long-standing organisation such as the Geological Society of London, there will be a number of individuals in their history whose actions, beliefs or writings are viewed as being abhorrent to present sensibilities. Much of this will be because the supremacist attitudes that enabled imperial expansion and slavery to flourish were also embedded into many of the academic studies of the period.

For example, in Europe the Swiss naturalist Louis Agassiz (1807-1873; Fig. 4) is lauded for his influential palaeontological and glacial studies. However, after moving to the US in 1846, he became a leading spokesman for the racist theory of polygeny. Polygeny is the concept that different races are effectively a different and lesser taxonomical species than the white race. It developed against a background of slavery and the expulsion of the Native Americans from their lands to give academic credence and justification for the inherent prejudices and mistreatments of the age. 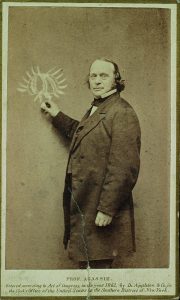 Polygeny was one of a number of prejudicial pseudosciences that developed across Europe and the US in the 19th century. Pseudosciences are studies that appear to have academic merit, but are based on superficial evidence to provide proof of a pre-established opinion. In polygeny’s case, it charted the visual differences between the ‘ideal’ body of the white male scientist and those of his inferior subject, based on concepts of western beauty. Agassiz held particular racist views on Black people and commissioned degrading photographs of slaves, yet polygeny and its ilk were not only applied to other races, but to women, children, Jewish people, immigrants, the poorer classes and disabled people.

The advent of female higher education at the end of the 19th century also saw women taking part in prejudicial studies. One of our early women members, the palaeobotanist Marie Stopes (1880-1958), is now viewed as a feminist champion of female reproductive rights. However, her motivation for offering contraception was the practice of her firmly held eugenic principles (Fig. 5). The aim of eugenics was to ‘improve the human race’, by removing its supposed degenerative elements. Stopes’ methodology was to restrict the reproduction of the poorer classes whom she considered ‘unfit’. Eugenics and much of the other prejudicial academia only fell out of mainstream view due to their association with the Holocaust in the Second World War. 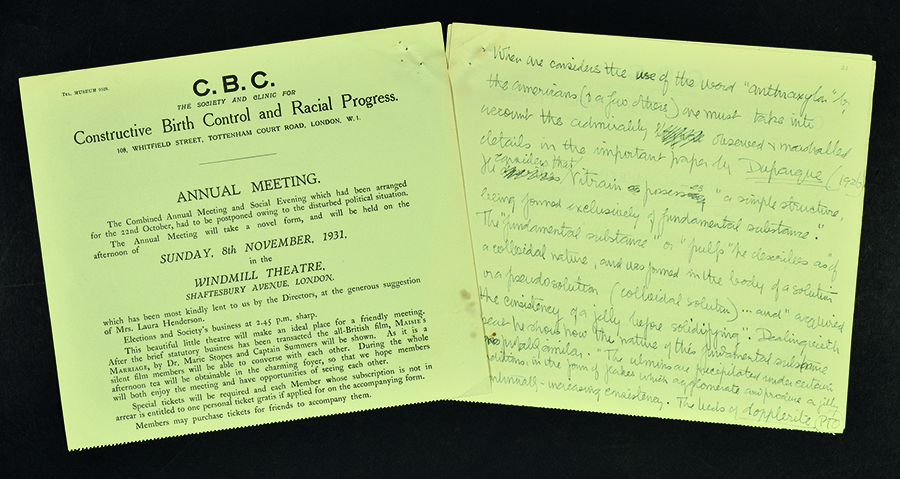 Figure 5: Notes on the petrology of coal [c.1935], written by Marie Stopes on the reverse of Annual General Meeting notices for The Society and Clinic for Constructive Birth Control and Racial Progress, 1931. Stopes set up the Constructive Birth Control (CBC) in 1921. (Archive ref: LDGSL/63; reproduced courtesy of the Geological Society of London)

Why now?
All people are products of their time. The attitudes and actions developed by those growing up in an era when, say, colonialism, slavery and racism were embedded into society is useful in understanding historic events. The issue is that in many cases these contextual explanations are never given in any great detail, resulting in a tendency to project only a white-washed, heroic narrative of history because it doesn’t mention the problematic bits.

The decolonising process seeks to add more contextual information, but striking a balance between acknowledging the importance of historical works with an openness on the attitudes and actions of their creators will not be easy or quick, and missteps are likely in this period of reflection while curatorial staff are finding their feet.