Dave Rothery discusses BepiColombo, the planetary probe flying close to the Sun to eventually orbit Mercury, the smallest planet in our solar system 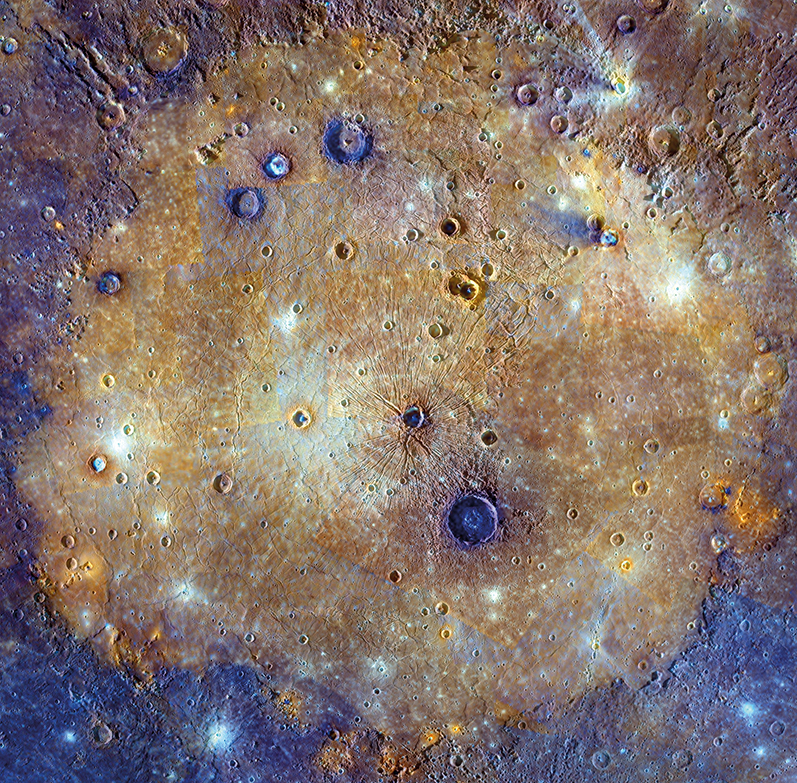 An enhanced colour composite image of the spectacular Caloris Basin on Mercury, which is a crater about 1,525 kilometres across. (Image credit: NASA/Johns Hopkins University Applied Physics Laboratory/Carnegie Institution of Washington)

On 1 October 2021 at 23.34 UTC, the BepiColombo mission – a joint project by the European and Japanese space agencies – carried out the first of six Mercury fly-bys. These fly-bys are needed so that the spacecraft can match its velocity with the planet’s, allowing it to be captured into orbit about Mercury in December 2025. Dave Rothery, a co-investigator on BepiColombo’s Mercury Imaging Xray Spectrometer that will map elemental abundances across Mercury’s surface, explains the geological importance of this small and remarkably dense planet.

Metal rich
“It’s a planet that we don’t understand. Mercury’s very high density suggests that it has a metallic core that is large relative to its silicate crust and mantle. The planet may have grown that way because of its close proximity to the Sun, where the high temperature hindered condensation of the less refractory elements. Alternatively, Mercury may have begun with a metal-to-silicate ratio that was more similar to Earth or Venus, but was then stripped of most of its silicates during a later collision event.

“The problem is that Mercury’s surface is rich in volatiles, which doesn’t sit easily with either of these scenarios because the volatiles should have been especially hindered from condensing, or vaporised and lost during an impact. Wherever you look, the surface has about 4% sulphur (probably in magnesium and calcium sulphides), as well as abundant chlorine, sodium and potassium.

“Mercury’s crust is very poor in iron. Its primordial magma ocean would have been equally iron-poor and thus insufficiently dense for plagioclase to float. So, there would have been no anorthositic primary crust forming when its primordial magma ocean began to solidify. Almost all of the crust is ‘secondary’, and composed of high-magnesium ‘basalts’, but there have also been abundant explosive volcanic eruptions, which can only happen if the ascending magma is volatile-rich or encounters volatiles in the subsurface. Currently, we don’t know what the main gas-forming volatiles were.” 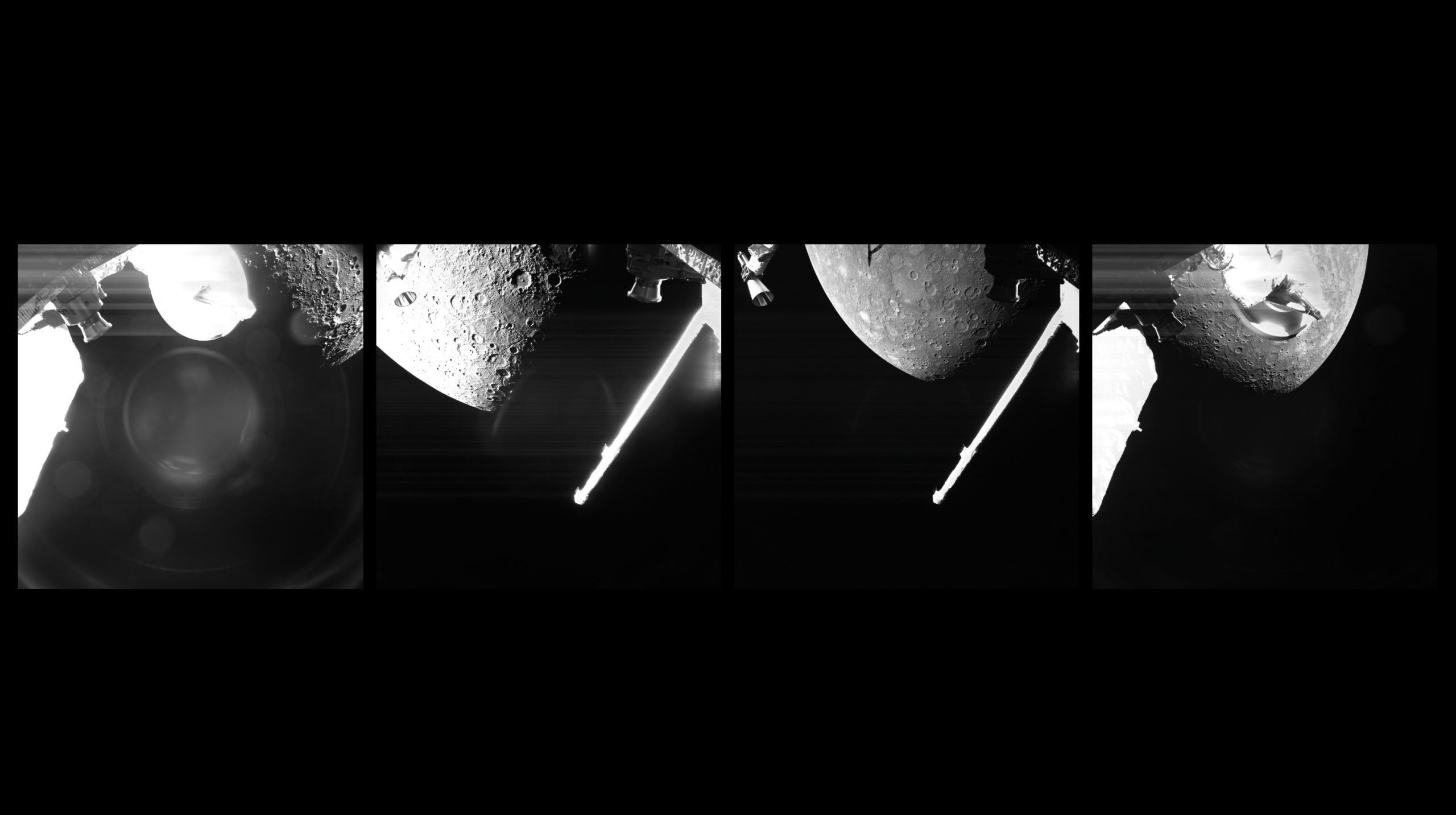 A view of Mercury captured by BepiColombo on 1 October 2021 at 23.34 UTC Most of the scientific instruments aboard BepiColombo cannot function during the cruise phase and the fly-by images are from simple cameras that don’t represent the abilities of the science payload. (Image credit: ESA/BepiColombo/MTM, CC BY-SA 3.0 IGO)

While there is currently no evidence for explosive volcanism on Mercury that is younger than a few hundred million years, Dave describes another volatile-dependent process that is ongoing today.

“We see growth of ‘hollows’. These are steep-sided, flat-bottomed depressions, hundreds of metres across, in which the top 10 or 20 m of surface has been removed. We don’t know how the material was removed, but it seems likely to require breakdown into individual atoms.”

Mercury is also a tectonically complex planet, with linked fault systems on the order of a thousand kilometres in length.

“Most of these are apparently a consequence of global thermal contraction, and we are still trying to work out the extent to which the faults and fractures acted as pathways for magma and volatile migration, despite the overall compressive regime.”

Potential mysteries
On arrival at Mercury, the propulsion unit will release BepiColombo’s two orbiters. These are ESA’s Mercury Planetary Orbiter (MPO), which will map the surface using X-rays, plus visible and infrared spectrometry, and JAXA’s Mercury Magnetospheric Orbiter (MMO) or Mio, which will analyse the magnetic field and space environment.

“The previous mission to Mercury, NASA’s MESSENGER, had a strongly eccentric orbit meaning that gravity, neutron, X-ray and lidar analyses were unobtainable at southerly latitudes. Importantly, MPO’s orbit about Mercury will give us equally good data from both hemispheres.

“MPO also has a magnetometer, enabling MPO and Mio to act together to study short-term events, such as magnetic storms, using data collected in two places at the same time.

“As a photogeologist, I’m looking forward to more detailed imaging, especially inside volcanic vents. In my more earnest moments, I think the mineralogic information from the infrared imaging spectrometer in combination with the elemental abundances from the X-ray spectrometer will be enough to allow petrologists to decipher how magmagenesis has evolved by depth and by degree of partial melting over time. We should then be able to deduce the composition of Mercury’s mantle and get a better feel for why the planet has such a low rock-to-metal ratio.

“The mission will enable us to better understand the origin and evolution of Mercury, but I also expect it to reveal mysteries that we know nothing about yet.”

Author
David Rothery is Professor of Planetary Geosciences in the Department of Physical Sciences at the Open University, UK. He leads ESA’s Mercury Surface and Composition Working Group and is a Co-Investigator on the Mercury Imaging Xray Spectrometer (MIXS, led
by the University of Leicester). @daverothery 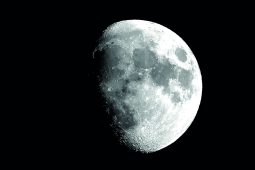 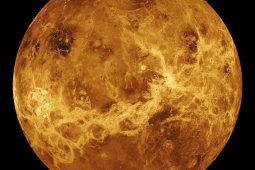 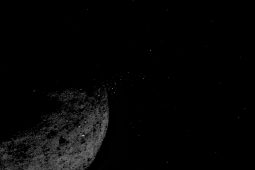 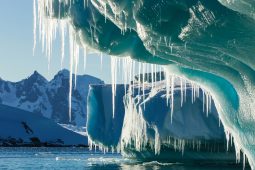 Climate change in the geological record