Mike Stephenson mulls what Shakespeare made of the landscape 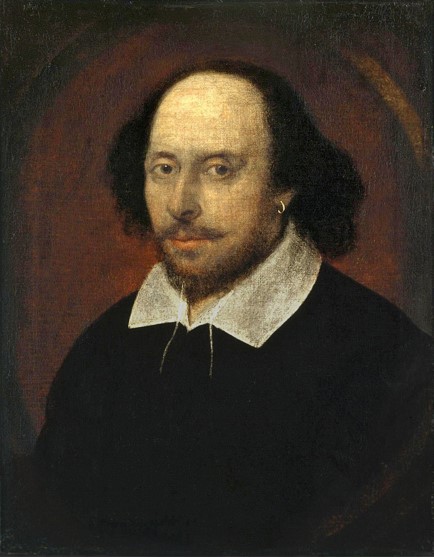 The ‘Chandos Portrait’ of Shakespeare. He would have received an intensive education in grammar based on Latin classical authors like Ovid, but no natural science (Credit: Photograph by John Taylor, Public Domain)

William Shakespeare probably knew nothing about formal geology as we know it, perhaps because there was no organised science of that name in existence before the 18th Century. But, his plays and poetry are full of references to geological materials, the landscape and the sea. These not only provide powerful natural backdrops for his characters, but also raw material for metaphors that resonate and deepen even today, four centuries later in power politics, human motivation and war.

Of course, Shakespeare was not alone amongst early poets in finding inspiration from the landscape and geological phenomena. The great Florentine poet Dante travelled Italy observing natural phenomena and in his Inferno there are references to hydrogeology, earthquakes, mountain building, and even the formation of travertine. His description of hell as a series of descending levels and La Mappa dell’Inferno – Botticelli’s painting of his interpretation of Dante’s hell – are images of the underworld that are still with us. In the Latin poet Ovid’s Metamorphoses, the landscape is full of symbolic power, for example in the stories of Niobe who was turned to stone for her arrogance, and Echo whose bones melted into the rocks leaving only her voice in the mountains. 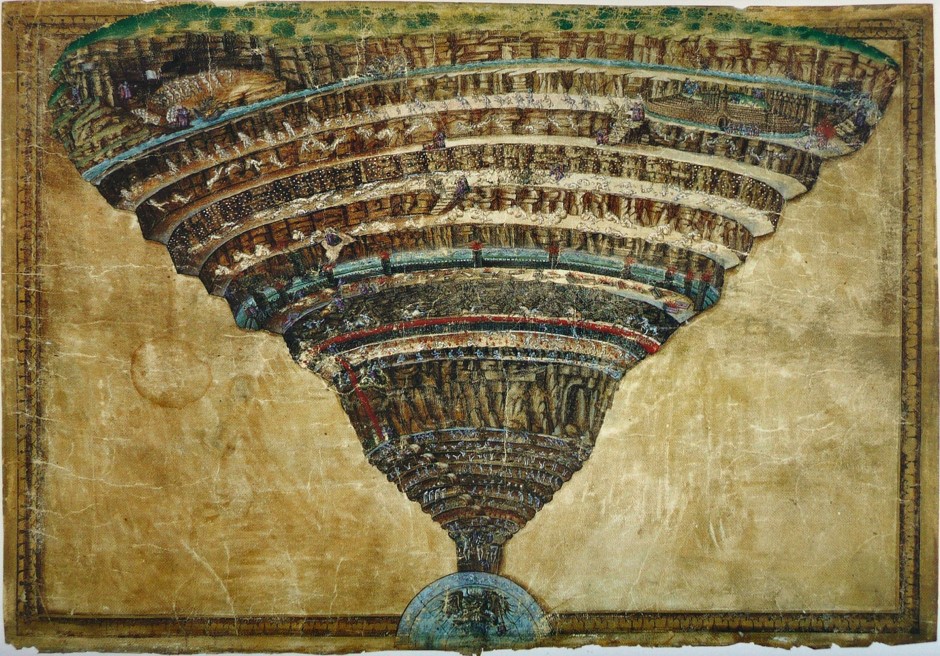 The Map of Hell by Botticelli, originally part of the illustrated manuscript of Dante’s Inferno. The image of hell interpreted from the Inferno has had a powerful influence on ideas about the underworld ever since. The upper parts of the structure appear to show well-bedded limestone (Credit: Public Domain)

Impressions of the land

So what geological features interested Shakespeare? We know he travelled a lot in England (and perhaps abroad) as an actor and playwright of the Lord Chamberlain’s Men, later the King’s Men. He soaked up impressions of the land and natural materials around him to make rich literary use of them. In Bradford Willard’s wonderful paper of 1947, ‘The Geology of Shakespeare’, we see some of these references set out in forensic detail. Amber, sulphur and mercury appear in many of the plays. Flint is very common, and often used predictably to symbolise hardness and resistance in human relationships, for example as Demetrius says to Tamora in Titus Andronicus:

Listen, fair madam. Let it be your glory

To see her tears, but be your heart to them

As unrelenting flint to drops of rain 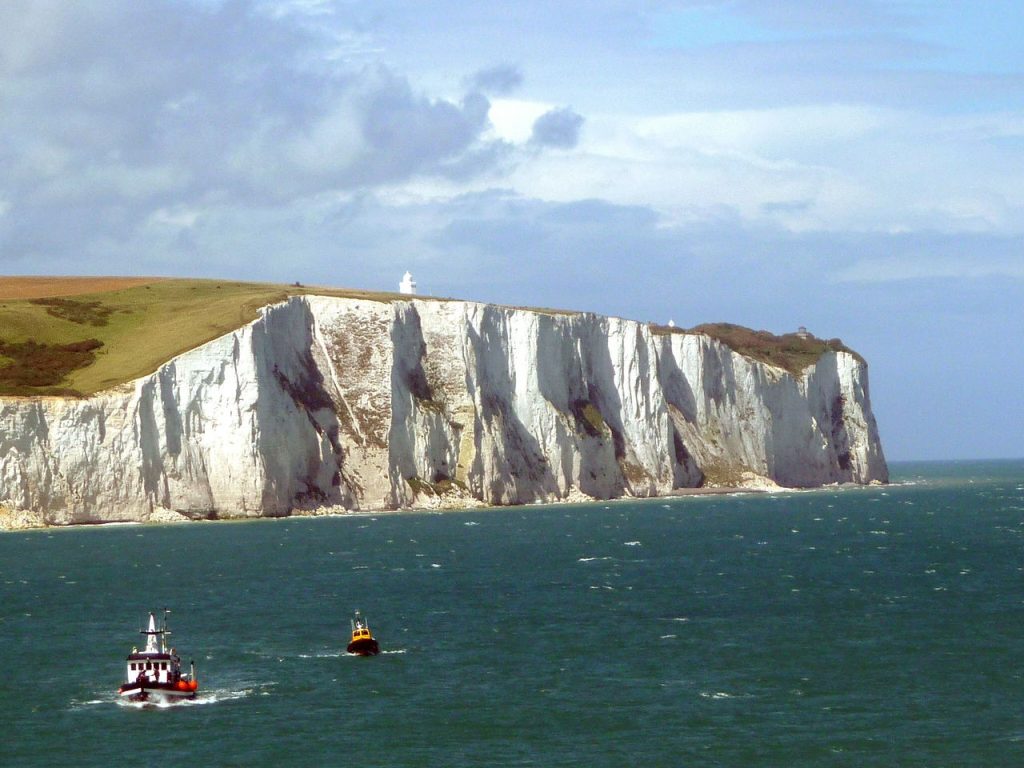 I would make a bet that Shakespeare visited the chalk cliffs at Dover. In the most dramatic part of King Lear, Edgar (son of the Earl of Gloucester) describes the cliffs to his blinded father – the crows and choughs (jackdaws) that fly there, and half way up the cliff, a samphire gatherer:

Come on, sir; here’s the place: stand still. How fearful

And dizzy ’tis to cast one’s eyes so low!

The crows and choughs that wing the midway air

Show scarce so gross as beetles: half way down

Hangs one that gathers samphire

But this is just a bright backdrop. Shakespeare’s landscape metaphors go deeper, showing how the enlightened mind thought the world worked, in the same way that Dante revealed the workings of the medieval mind and its conception of hell in the Inferno. For example, Shakespeare seems to have had a feel for the cycle of erosion and deposition, entropy, and the impermanence of all things. This is from Henry IV Part II where the King muses on fate – mountains eroded to nothing and continents disappearing into the sea:

O God! that one might read the book of fate,

And see the revolution of the times

Make mountains level, and the continent,

Weary of solid firmness, melt itself

There’s something of our conception of entropy here, and of our fear of disorder. He personifies the continent as being tired of being solid and firm, tired of its fight against inevitable destruction.

Most of us studied Shakespeare at school, and at least in my English lessons, the emphasis was on his deep understanding of power and politics. You don’t have to be a literary scholar to see the power politics in Julius Caesar or Macbeth – and their relevance to today’s power politics in the West, China and Russia.

In Othello, there are marine images of conflict and war in areas like the Black Sea that have obvious relevance today, where geomorphological phenomena are transformed into deep metaphors. Like in this passage, where Othello describes the violence, relentlessness and inevitability of his jealously and revenge toward Desdemona, his wife:

Whose icy current and compulsive course

Ne’er feels retiring ebb, but keeps due on

To the Propontic and the Hellespont,

Even so my bloody thoughts, with violent pace,

Shall ne’er look back, ne’er ebb to humble love,

Till that a capable and wide revenge

the violence of his jealously will never look back, never ebb, never become calm until his revenge has swallowed him up and eased his violent feelings

Shakespeare must have known the power of the flow of water south-westward from the Pontic Sea (Black Sea), through the Propontic (Sea of Marmara) and the Hellespont (Dardanelles) – and known that his audience would know it too – for the metaphor to have its power to evoke unstoppable, destructive human motivation. The area was as it is today, vitally important for trade and strategic in war. For Othello, the violence of his jealously will never look back, never ebb, never become calm until his revenge has swallowed him up and eased his violent feelings.

Shakespeare is often credited with writing the first psychological dramas (the Tragedies), and in these plays landscape, rivers and water often appear as the basis for powerful metaphors. In Macbeth, for example, the main character vacillates between action and indecision. Early on in the play, Macbeth is contemplating killing King Duncan and, in a long soliloquy, he thinks about the dangers of the murder. He is under intense pressure from his wife, and because he knows the King won’t stay long at his castle, so he must decide. Here’s part of the soliloquy:

If it were done when ’tis done, then ’twere well

It were done quickly. If th’assassination

Could trammel up the consequence, and catch

With his surcease success: that but this blow

But here upon this bank and shoal of time,

We’d jump the life to come

Those beautiful last two lines use a river system as an image – a river with a bank and a shoal (a shallow). Macbeth feels the pressure, but he is temporarily still. The inevitable power of the river is all around him, ready to lift him off the shallows, into action. I like to imagine Shakespeare by a river – perhaps the Avon or the Trent at low tide – idly watching the flow around a sandy bank or shallow and constructing his metaphor. There’s a feeling of loneliness – of a man standing apart from the flow of life – but also a man allowed a little time for contemplation. 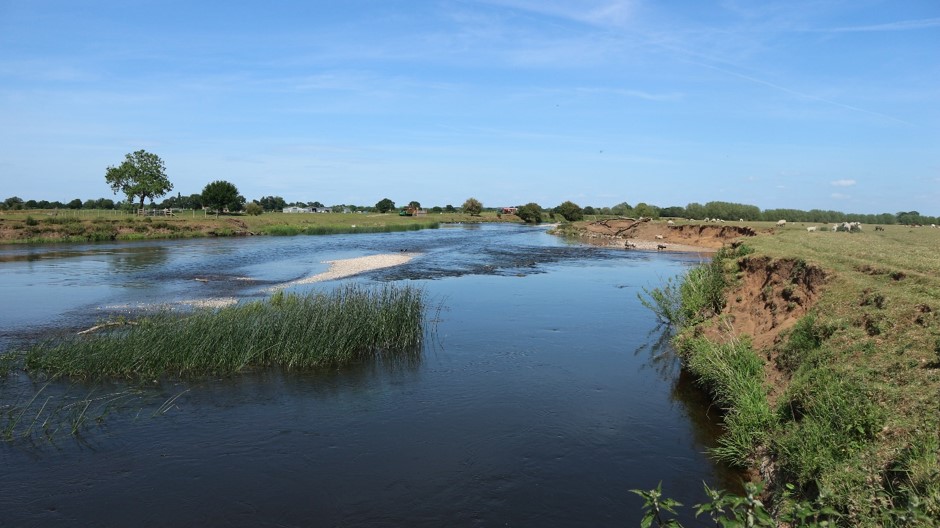 Sandbanks on the River Trent. Shakespeare certainly knew the river and it had an influence on his writing, for example in Henry IV Part I. River processes turn up in his plays and sonnets to denote time passing, the progression of life and the inevitability of change (© M H Stephenson)

An intriguing landscape metaphor is from Hamlet, buried deep within the famous ‘to be or not to be’ soliloquy, perhaps the most famous poetry in all literature. We all know that at this point Hamlet, Prince of Denmark, is desperate and contemplating suicide. He’s weighing up the pain and unfairness of life against the alternative. One way that the alternative turns up is in the phrase ‘undiscover’d country’:

To grunt and sweat under a weary life,

But that the dread of something after death,

The undiscover’d country, from whose bourn

No traveller returns, puzzles the will,

And makes us rather bear those ills we have,

Than fly to others that we know not of?

The most common meaning of the word ‘bourn’ used in the interpretation of these lines is as a boundary. Hence, the idea that Hamlet’s death would take him on a one-way journey to a place beyond a border. But bourn is also an old word for an intermittent stream in a dry valley in chalk downland (it also crops up in other spellings, bourne, borne or born). Shakespeare probably knew these valleys from his travels and from his childhood in the Cotswolds, and perhaps had noted their strangeness – like a natural valley but not quite – lacking the vital life of a stream. A valley and not a valley – like a ghost landscape. Perhaps this is how he saw the afterlife. 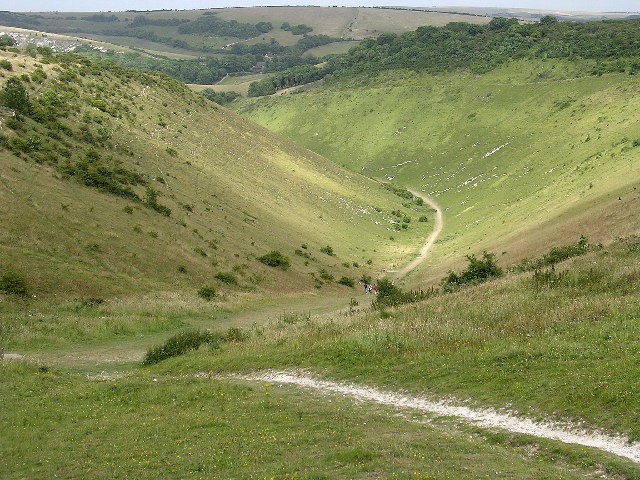 The Devil’s Dyke in Sussex. Shakespeare probably knew these downland dry valleys and perhaps they influenced his ideas of the afterlife (Credit: Val Vannet, CC BY-SA 2.0, via Wikimedia Commons)

Shakespeare and poets like Dante used the world around them to turbocharge their expression, to get through to us. Their characters speak to us despite their antiquity because they ground their experience in the natural world as we do, and explore and deepen its meaning with metaphor. It’s heartening to see that the processes we study as geologists and environmental scientists are so much a part of the literature that has influenced stories, minds and philosophies ever since.