The Mantle of the Earth: Genealogies of a Geographical Metaphor 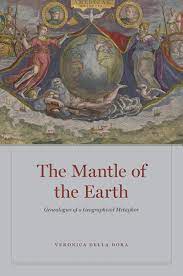 The geological term ‘mantle’ has only been in use since the 1940s, but the word itself has been widely used since biblical times. Mantles both conceal and protect, as a ‘garment’, a ‘piece of clothing and an adornment’ that describes the diversity and splendor of the natural world and its seasonal changes. This engaging and erudite book explores the intellectual genealogy of the Earth’s mantle, and its representation in art, literature, geography and maps. ‘It is about being above the earth, not within it.’

The first part, Clothing Creation, follows the threads of ancient and medieval history through mythical and biblical mantles. It highlights the mantle of creation as a divine craft, and the reassurance it offers on a range of scales from the cosmos to the human body.

Unveiling Space traces the shift from ‘wrapping to unveiling’, exploring the disruption of the ancient orders through discovery across the surface of the Earth, and within the human body. Architects and artists explored linear perspective and depth as a third perspective, and poetic contemplation helped scientists make contact with the cosmos and its mysteries.

The Surfaces of Modernity looks at incarnations of the mantle metaphor from the late nineteenth century through the Cold War in the establishment of geography as a discipline, exploration of extreme environments in space, the Earth’s interior and Antarctica, and environmental discourse. The scientific metaphor of the Earth’s mantle was juxtaposed with the ‘green mantle of the earth’ in response to the threats posed by nuclear fallout and chemical pollution.

Weaving looks at modern and contemporary textile artworks and metaphors, and a modern world saturated with flickering images and plasma screens. A new mantle, ‘an ecology of screens’, wraps the Earth, a vast web of perception crowds our daily lives – perhaps the next incarnation of the ancient mantle of the Earth.

I greatly enjoyed the opportunity to read what in many ways is an astonishing book. It is ambitious, impressively well researched, and delightfully written. It deftly sets textual sources, from ancient Greek literature to Romantic poetry and twentieth-century popular science, alongside contemporary graphic representations and objects including textiles, maps, artworks and geological diagrams. It explores the continuities and discontinuities in the history of Western geographical imagination, and ends with ‘Like the shuttle of a skilled weaver, the geographer’s pen crafts new mantles of words. Warp and weft cross again and again, as the fabric of human history silently unfolds. Which thread we should follow is up to us.’