The Geotraveller: Geology of Famous Geosites and Areas of Historical Interest 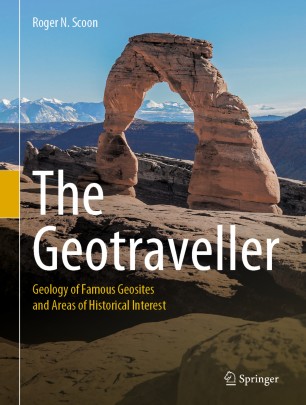 A memorable trip to Tanzania in 1995 spearheaded Roger Scoon’s abiding passion for geoheritage and geotourism. The trip, which was organised and led by Roger together with the late Professor Morris Viljoen on behalf of the Geological Society of South Africa, displayed the iconic volcanoes, craters, rift-valley escarpments, volcanic plateau, rivers and lakes of East Africa, as well as the remarkable story of early human development that is recorded in the rock formations at Oldupai gorge and Laetoli. The teaming herds of wildlife feeding on the grassy plains of the nutrient-rich volcanic soils of the Serengeti, Masai Mara and Ngorongoro crater floor were also part of the bigger picture, making the area a veritable tourist paradise.

Over the years, Roger’s interest in geotourism has led him to explore many other geoheritage hotspots, notably those around the Mediterranean basin and the spectacular National Parks of the Western United States.

Over eight chapters, Roger chronicles in a most compelling way the remarkable influence that geology has had on the development of human civilization in the Mediterranean area. The importance of both active and extinct volcanoes, earthquakes, floods and droughts, including many of the major geological events that shaped our history over thousands of years, are vividly portrayed.

Similarly, the importance of the underlying geology, the influence of climate, glaciers and the weathering of rock formations that created the spectacular landscapes and landforms of the Western United States and Canada are described in a very readable way.

Two chapters deal with another subject about which the author is passionate: igneous complexes. The remarkable layered igneous intrusions of Skaergaard in Greenland and the Bushveld igneous complex of South Africa, with its iconic layers of some of the most important minerals of great importance in the modern world, are discussed. A chapter on the Lake District of north west England completes the wide scope of the book.

Besides the lucid descriptions and the integration of various disciplines with geology, a hallmark of the book is the wonderful photographs, many taken by the author, as well as numerous diagrams and maps, which assist in making the subject come alive. The book a most informative documentation of some of the most outstanding and much visited geosites of the world.