The Anthropocene: A Multidisciplinary Approach 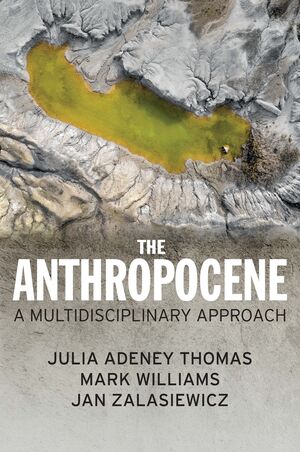 Familiarity with the Anthropocene continues to grow; what was previously considered rarely heard jargon in the 1970s is now just as easily heard in a university undergraduate course as read in a weekend newspaper edition. Yet for many people, understanding of the concept remains elusive: what are the ways we define, delineate, and conceptualize our current, unprecedented geological epoch?

Together, Thomas, Williams, and Zalasiewicz combine history, palaeobiology, and palaeoenvironmentalism to craft a well-developed guide for readers seeking to better understand not only the Anthropocene as a period, but as a culture. Two kinds of mapping take place across the book’s eight chapters. First, the authors travel across disciplines to detail the cultural origins of the Anthropocene. Second, they draw from—and explain, when required—scientific definitions and developments, particularly from Earth Systems sciences, to define what it is, exactly, that makes our current era so distinctive.

There are several schools of thought about when the start of the Anthropocene actually falls. The authors align themselves with the Great Acceleration school of thought (rather than the Industrial Revolution or Agricultural Revolution) and explain their decision well, asserting that it was from 1950 onwards (the nuclear age) that technological developments, industrialization, and population growth became ubiquitous global spikes.

From the introduction and first chapter, the authors progress from framing the Anthropocene as a geological concept to addressing political, social, and ethical dimensions through the lenses of Economics, Cultural Studies, Political Science, and Biology. The humanities are addressed, too, as conversations about socio-cultural and political effects of a warming planet inherently provoke questions of philosophy and crucial race theory.

Throughout the text, the authors wrestle with an uncomfortable question: how do scholars and practitioners coordinate action in one field—much less across disciplines—to address a problem as complex, comprehensive, and looming as humanity’s entry into a new era? Their efforts in answering this question centre on a commitment to conversation: creating a text that brings disciplines together, rather than facilitating the continued brush-by of disciplinary echo chambers.

Overall, the authors have accomplished something that deserves recognition: they have taken an oft-overloaded concept and broken it down in an accessible manner, creating a book that is just as understandable for interested lay readers as is it for early career scholars and scientists alike. Readers come away from the book with a sense of urgency that the realities brought about by our current epoch—climate change, resource stress, and extinctions—will require global and multidisciplinary efforts to effect a hopeful future.

Reviewed by Dr. Ellen A. Ahlness