Edited by the Oxford University Museum of Natural History 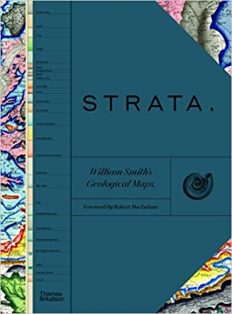 I was informed as a student of how William Smith had made history by publishing the first ever geological map of an entire nation. Little historical background was provided, however, other than that Smith had worked as an engineering surveyor for canal building. Mention of his using fossils to correlate his formations was similarly brief, the lecturer moving swiftly on to describing the formations underlying the United Kingdom.

Regarding Smith’s accomplishment, this gloriously colourful, large format book reproduces not only Smith’s country-wide map of 1815, but also the many county-wide maps that preceded it. It also reproduces the engraved illustrations of his fossil collection, published in a book to accompany the 1815 map, and provides photographs of those fossils that show just how accurate were his illustrations.

But this book provides much historical information also, with copious reproductions of illustrations to support it. The excitement for me was in the way it describes how Smith’s work was not produced in a geological vacuum (the impression I received from my lecturer).

Born in Churchill, Oxfordshire, in 1769, Smith showed an aptitude for drawing and mathematics. His skills led to employment as an assistant land surveyor in 1787, and he was sent to survey a Somerset estate in 1791. There he encountered the work of John Strachey (1671-1743), an Oxford educated country squire who had used geology to prospect for coal. Smith obtained a copy of Strachey’s geological cross-section of the Somerset coalfield, which opened Smith’s eyes to the sedimentary rock succession and its contained fossils.

Employed by the Somersetshire Coal Canal Company in 1793, Smith confirmed Strachey’s observations in both mines and canal cuttings. He expanded on these geological ideas while working as a peripatetic surveyor and engineer, gathering the geological information that would culminate in his 1815 map. His map, and his county maps, differed from earlier maps in that Smith extended his knowledge into the subsurface, predicting which formations were to be encountered at depth. Prior maps, such Guettard’s 1746 map, merely showed what minerals were encountered at the surface. Among the many historical notes, we are told that Strachey thought that the Earth began to rotate on the fourth day of biblical creation, resulting in a flexing of newly deposited strata eastwards, towards the Earth’s centre. Smith apparently believed this for his entire life.

This book is sure to fascinate geologists, palaeontologists and historians of geology alike.