Rock Doctor: Adventures of a Field Geologist Before 9/11 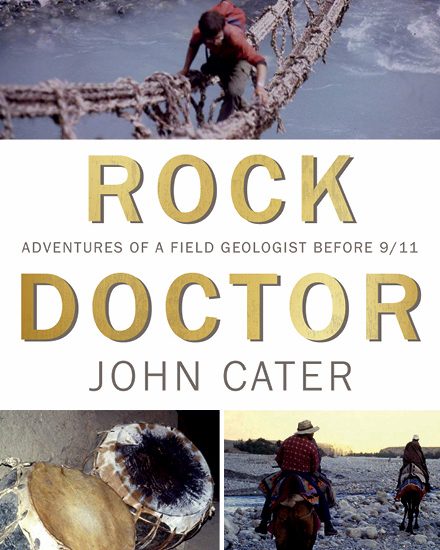 Late twentieth century life was generally more relaxed than it is now. That was before Covid-19, of course, let alone 9/11. If you cannot remember that far back or your memories make you want to disagree, read John Cater’s book and experience this world through his eyes. It was a world where life could be relatively simple, even if the issues being worked on were as complex as field-geology can be.

Cater gained his PhD – hence the book’s title “Rock Doctor” – at Birmingham University on the basis of several years’ work in south-east Spain. He then spent about a decade and a half carrying out fundamental oil exploration in the Middle East and Indo-Pakistan, in a broadly curved string of countries that included Turkey, Yemen, Nepal, (Tibetan) India, Syria and Russia.

The book is a compilation of stories told with gentle humour about working and travelling as a field geologist. All of them, individually and as a set, are good and many are humorous. There is even room for real geology, too – an ancient and failed rift, running parallel to the Red Sea under the sands of Yemen, new structures in Turkey, the uplift and origin of the Himalaya, the latter discussed while climbing toward one of the peaks.

Many of the non-geological stories are equally stunning. In the border area between Yemen and Saudi Arabia, the local tribesmen used to steal oil company vehicles. When they did so, however, they would provide written receipts in the hope that replacement vehicles would be easier to arrange (and, naturally, also be stolen). When the Yemeni Army entered the area in their Soviet-built tanks, with the aim of managing the problem, they met the locals driving Saudi-supplied tanks … and decided to leave them to it.

In the final decades of the twentieth century, as recounted in the book, one could play a drum solo in a Sufi temple, share a goat with Pathan tribesmen, guide a helicopter down onto a Turkish threshing ground, go to the gold souk in Damascus, and get into and crawl though hand-hewn, bat-infested Roman sewers from the grounds of one’s hotel. At that time, too, approval for fieldwork in many areas came from the local tribes, not government officials. Few such things could be done now. The book is well illustrated, although some pictures are too small to be helpful. It is well worth reading.