Measures for Measure: Geology and the Industrial Revolution 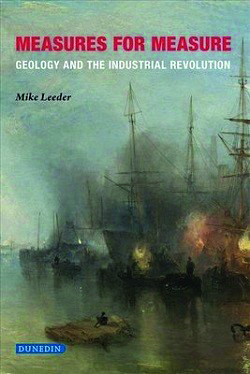 As geologists, we understand that the Carboniferous rocks of the Coal Measures were essential to the first Industrial Revolution. They determined its location, pace and extent. This book explains this relationship and the profound consequences to our landscape, society, culture and economics that followed.

An engaging narrative with cameos is used to frame the story, referencing the writings and eye-witness accounts of contemporary individuals. The geological firsts attributed to George Sinclair, whose work involved predicting where mineral resources could be found and easy won, were particularly insightful. Abraham Darby with his technological knowhow sparked the revolutionary blueprint, but he relocated to Coalbrookdale for a reason!

Professor Leeder’s vast knowledge comes to the fore in explaining the how, why and where. The answers, of course, are in the rocks, from the rise of forests, palaeoclimate and diagenesis to the Rheic Ocean’s demise and, finally, basin inversion. The richness of the geological story presented is like the creation of Pangaea itself – an impressive all-encompassing assemblage.

Contemporary artists’ depictions of industrialisation provoked much controversy. John Ruskin’s critiques exemplified the so called ‘crisis in the sublime’ – were these works degrading of the natural world and the objectivity of landscape painting? Certainly, the sometimes idyllic depictions of working life belied the dystopian reality. The social legacy was, for me, most poignantly expressed by the lyrics of the song Trimdon Grange Explosion – little explanation is perhaps necessary. We learn of stories that today strike us with their great irony, including French geochemist Eblemen’s vital connections on the lifecycle of carbon that were published, but went unrecognised and lost to science for 140 years – a travesty, most probably.

Leeder’s finale is a comprehensive tour across nine of the former coal-based industrial regions to explain their individual geology and situational nuances. Interwoven with poetry, quotes and works of art, Measures for Measure will appeal to a wide readership. As the Black Country celebrates its recent UNESCO global geopark status, it is complementary and timely.

Whether a balance between narrative and textbook style is achieved, only the reader can decide. It is, however, an enjoyable and thought-provoking read and thoroughly recommended.