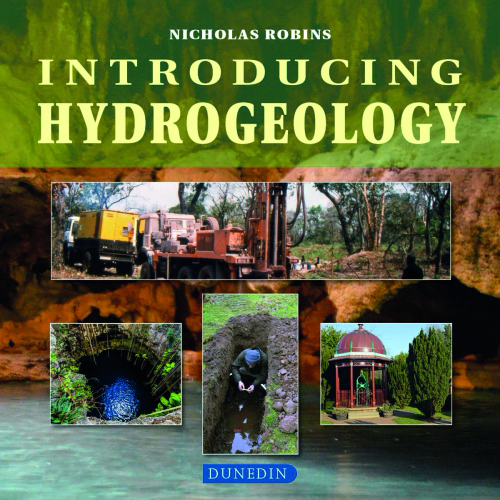 Introducing Hydrogeology is another addition to the ‘Introducing Earth and Environmental Sciences’ series, which focuses on providing elementary understanding of the sub-disciplines in the Earth and Environmental Sciences. Hydrogeology is a critical part of applied geology and deals with the distribution and movement of water in Earth’s crust. Groundwater transport is an important part of the overall hydrological cycle, in which water is transferred by evaporation from the oceans and seas into the atmosphere. This cycles back to the ground through precipitation and some percolates underground to become groundwater. This process imprints distinct chemical signatures on the water, dependent on the rock type the water contacts, and migration can occur over a period of a few weeks to tens of thousands of years.

Hydrogeology intersects a variety of disciplines that do not strictly fall within geology, including hydrology, climatology and socioeconomics. Therefore, this guide describes the base concepts of groundwater flow analysis in simple language and avoids jargon or detailed analysis of the topic (there is also a glossary). The book describes all facets of the science, physical and chemical, together with topical issues, including climate change and our insatiable demand for water. It also covers subjects including aquifers, groundwater flow and numerical analysis, boreholes and testing, the management and quality of groundwater (including pollution and protection), flood, drought and subsidence.

The book will appeal to Earth scientists and engineers unfamiliar with the topic, as well as students and non-scientists looking for a basic text on the subject. The book’s emphasis is the underlying measure of the importance of hydrogeology to society, and this is communicated through example topics such as climate change impact, water scarcity, nuclear waste repositories and oil shale fracking.

Nicholas Robins worked for much of his career as a hydrogeologist with the British Geological Survey, in the UK and overseas, and has also been involved with research into radioactive waste disposal. As current Editor-in-Chief for the International Association of Hydrogeologists, he is well placed to review contemporary literature in the field.

A definition I was once given of an expert is not how much they can write on a topic, but rather how well they can explain that topic in a few words. By this definition Nicholas Robins is an expert in hydrogeology and succeeds in providing a readable introduction to hydrogeology in a slim volume. I strongly recommend this book to those interested in pursuing hydrogeology as a discipline.