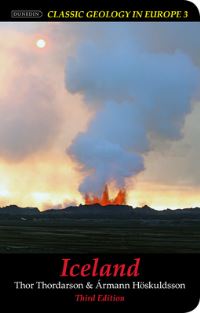 If you are going sightseeing or touring in Iceland, you need to take this book with you. It offers a very good geological outline of the world’s youngest significant landmass, presented as a set of excursions that, between them, extend right round the country. The book finishes with a short chapter on the recent Fagradalsfjall eruption (2021), Iceland’s longest so far this century, and a useful glossary.

As noted by others, Iceland is both the only remaining active part of the North Atlantic Large Igneous Province and the only place where the construction of such provinces can be seen in action. In other words, the country’s geological history, while relatively brief, is a key example of the early formation of a continent.

The first chapter, about 20% of the main text, deals in reasonable detail with the geology of the country as a whole, with clear and simple explanations. The book is well illustrated throughout with a large number of photographs, maps, and diagrams. Almost all of the photographs are of good quality and reproduced to a high standard, several of the pictures are fabulous, in fact. However, on some diagrams, some explanatory marks (such as arrows or pecked lines) are too small or fine and can be hard to see. On the other hand, using a lens to make a diagram clearer also confirmed the good quality of the reproduction.

Iceland’s landmass began to form around 33 million years ago, very recently in conventional geological terms. That is more than enough time for major change to occur in a volcanic environment, and the oldest rocks visible on the surface now are between 14 and 18 million years old. Attention is drawn to the relatively high rates of change that arise through weathering and sedimentary, as well as volcanic, processes. The authors note, in a memorable way, that “Mýrdalssandur [central southern Iceland] and the neighbouring areas have changed more in the past 1100 years than, for example, the landscape of Western Australia has in 40 million”.

The book includes good explanations of many typical features of this type of geological environment, including the genesis of rootless volcanic cones and the different outcomes of submarine, sub-glacial, sub-aerial, and fissure eruptions. A clear understanding of Iceland’s geology and geological history, as supplied by this excellent book, will also provide a strong base for understanding its culture.