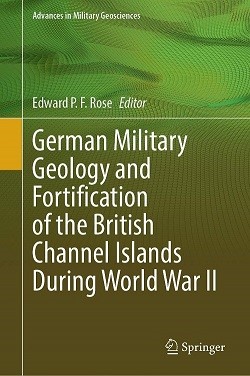 The Channel Islands were the only part of Britain occupied by Germany during World War II. The islands, thought to be indefensible, were demilitarised by the British Government in the summer of 1940, with some of the population evacuated to mainland Britain. German occupation began immediately thereafter. Because Germany feared recapture of the islands by Britain, protection against a potential invasion was crucial. German fortification concentrated on the three largest islands, Jersey, Guernsey and Alderney. Guernsey was the most heavily fortified, particularly on its north side, because of its nearness to mainland Britain.

Military geologists were heavily involved in the fortification of the islands, with at least 14 employed. Unlike the UK and the US, Germany employed large numbers of trained geologists, about 400 by the end of the war. Military geologists on the Channel Islands served in the Army and Air Force (Luftwaffe). Work for the Navy, primarily coastal defense structures, was most likely done by Army military geology teams. Later in the Occupation, military geologists also provided support to Organisation Todt, the German construction agency.

The geography, the geological knowledge available at the time, and the historical fortifications are described in the early chapters of this book. The work of military geologists on each island between 1941 and 1943 is then discussed. At least 51 written reports and at least 26 thematic maps were prepared; these are preserved in archives in the US, the UK and Germany. Detailed descriptions of the German fortifications on each island are provided.

The main contribution of the military geologists dealt with ground water conditions and water supply for camps and batteries; they supervised drilling and mapped the locations of springs and wells. This was especially important because there is little surface water on the islands and the existing supply was unable to support the increased military population. In addition, new maps of the local geology, primarily Palaeozoic metamorphic and igneous rocks, were made and thematic military geology maps were prepared. They also provided advice on quarrying; sources of raw materials, especially aggregate for concrete; tunnelling; fuel and ammunition storage; site characterization for batteries and other structures; anti-tank defences, especially on beaches; and airfield construction.

The book is lavishly and beautifully illustrated with photographs of the fortifications, original drawings and sketch maps of the military works and historical military geology maps. Many examples of the German fortifications, particularly tunnels and observation posts, survive in the landscape today and some have been adapted for modern use, such as in museums.