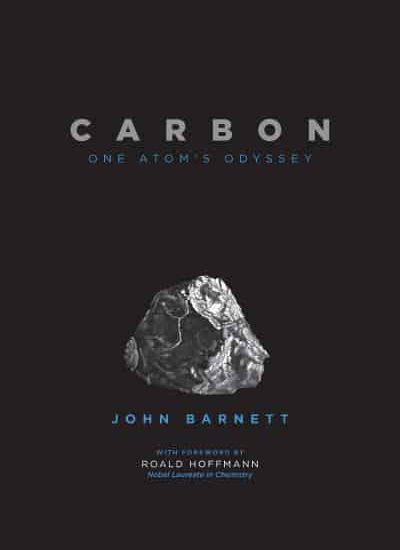 This is an illustrated adaptation of Primo Levi’s short story ‘Carbon’. (Levi was an Italian chemist and writer, who survived Auschwitz.) It follows a carbon atom from birth, perhaps half a billion years after the Big Bang, to today, through a set of vignettes.

The book begins with a brilliantly observant quote from Lucretius – 1st century BCE – and then skips over the first 10 billion years of the atom’s life via a series of illustrations that include Laniakea, our home supercluster. This is reasonable as that time might well have been relatively uneventful, and squeezing 13 to 14 billion years into 60-odd pages is quite tough. The storyline comes into sharper focus as the atom forms part of a coccolithophore platelet (perhaps in the Permo-Triassic) that becomes entombed in limestone. Calcining releases the atom again, enabling it to strengthen a tree, take part in winemaking, help a man chase a horse, enhance a moth’s sight, and nourish a bee before moving into the author’s brain, to help direct his choices and thoughts about the story. The book ends there, but the atom will, presumably, move on through the remaining few billions of years until Earth is swallowed by the dying and collapsing Sun.

The story is told largely through pencil-drawn illustrations, although plates are used at times, when they can add purpose. Some illustrations/plates are accompanied by well written, clear and simple text, as well as clean structural diagrams of the various chemical species named. Many illustrations speak just as clearly for themselves, however, with no need for written words. The ensemble fits together very well to make a worthwhile whole.

The book is short and the pictures are all good – some, indeed, are beautiful. There is no need for it to contain any more because the story is what it is. Carbon and the carbon cycle(s) are fundamental to life as known on Earth. One or many huge books could be written about the element’s story, whether in part or as a whole. This version does a good job in a small space, however, and is succinct and complete in itself.

The author does not delve deeply into science, which is not his purpose. This book is to look at and enjoy, and to help make one think. This review is based on the hardcopy version, with good-looking illustrations that might not work so well in an electronic format.