Spacescapes: postcards from our solar system

Let us take you on a journey through our solar system, stopping off to visit geysers on Enceladus, the Perseverance Rover on Mars and impact craters on the Moon

Words by The Authorship Team listed below
1 December 2021 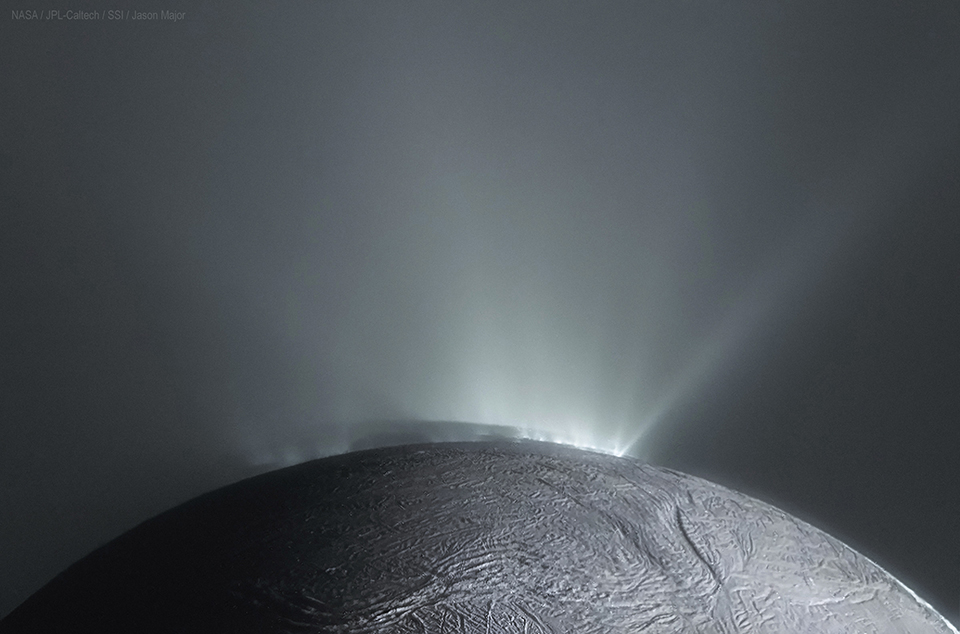 Throughout the history of space exploration, we have sent missions and probes to a staggering eight planets in our solar system, as well as to the asteroid belt and other celestial bodies. Today, automated rovers on Mars have ushered in an exciting new era for space exploration. The ability to collect and analyse Martian air and soil samples remotely from Earth, or on Earth in the future, once samples are returned, is the true frontier of space science, and in September 2021, the Perseverance Rover successfully collected the first sample of Martian rock from Jezero Crater. These ground-breaking missions help us observe and understand processes on distant planets like never before.

This summer, the Geological Society held a free, outdoor, public exhibition in the Burlington House Courtyard as part of our 2021 Year of Space. The exhibition featured incredible, high-definition images of the landscapes and geological features seen around our solar system, and explored the ways in which understanding Earth can help us uncover the history of planetary bodies across our solar system and beyond. For those who were unable to visit the exhibition, or those who simply want a reminder of the stunning imagery, here we provide a small snapshot of Spacescapes: Postcards from our solar system. View the full exhibition at www.spacescapes.geolsoc.org.uk

Secret seas
It is thought that Saturn is orbited by around 82 moons, but its diminutive moon Enceladus exhibits some of the most fascinating features in the solar system. Fast jets of gas, water vapour and ice stream out from Enceladus’s south pole (main image, p. 27), spraying debris into space where it forms Saturn’s outermost rings. It is hypothesised that these powerful eruptions originate from a hidden ocean lying beneath Enceladus’s icy crust. Scientists are interested in ocean worlds like Enceladus because of their potential to support microbial life.

The Perseverance Rover (Fig. 1), NASA’s latest mission to Mars, landed in Jezero Crater on 18 February 2021. Nicknamed ‘Percy’, the rover aims to study the geology of Mars and to hunt for evidence of past life on the red planet. Percy can take photos and videos, measure the chemical composition of rocks, and drill into the surface to collect samples of rock and soil. Future NASA and ESA missions plan to retrieve and return these to Earth. 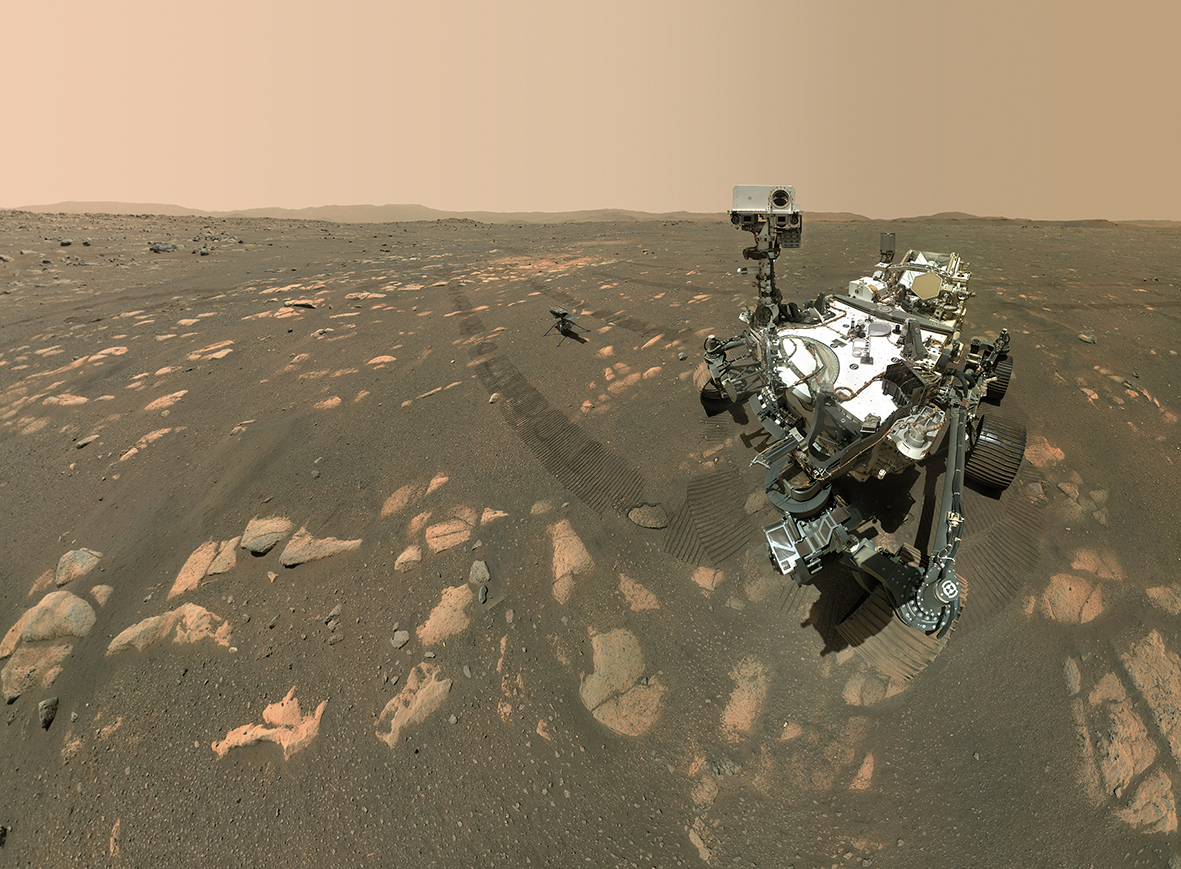 Martian missions have shown that the landscapes and features of the red planet are strikingly similar to those on Earth; among the most easily identifiable are sand dunes. These images from Earth and Mars (Fig. 2) are almost indistinguishable from one another, showing beautiful barchan and star-shaped dunes forming on both planets. A key difference is evident in the frosty edges of Mars’ dunes: on Mars, the dunes are found in areas where temperatures can plummet to -150 degrees Celsius. 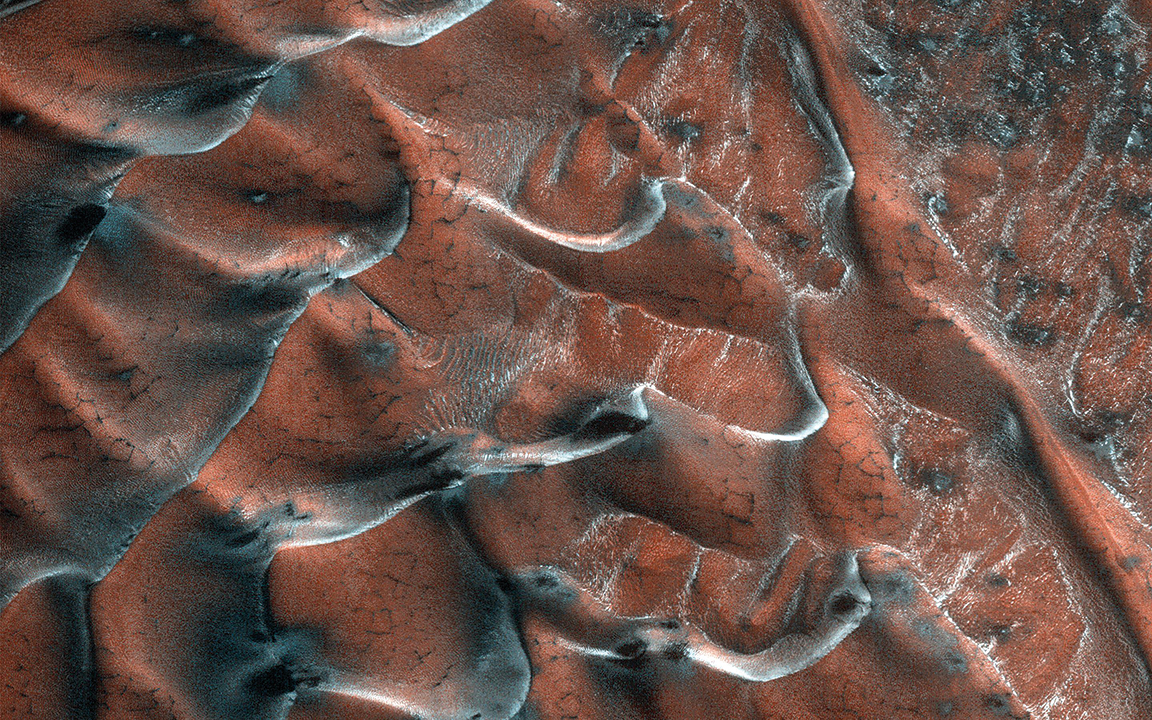 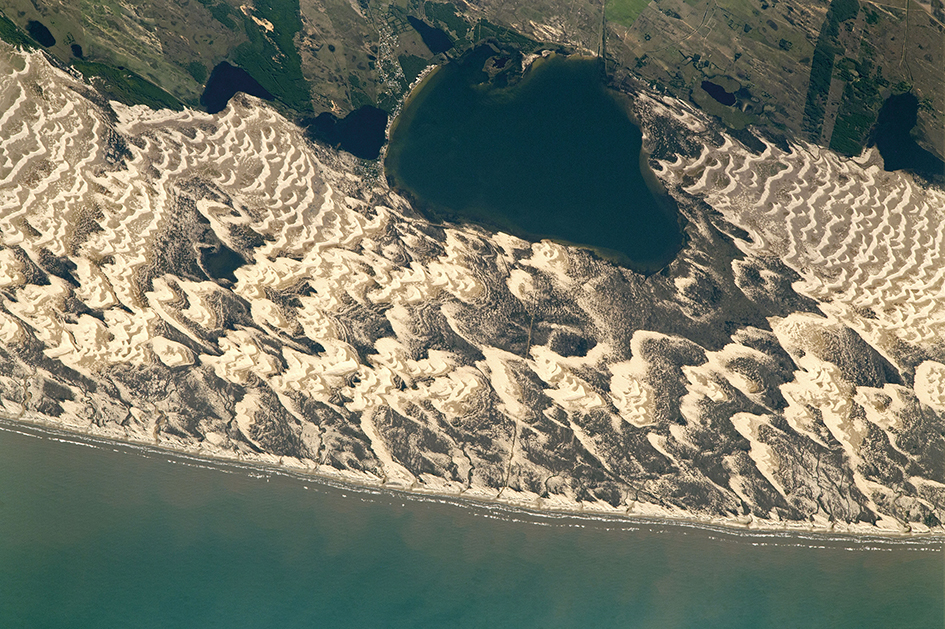 Dunes form when grains of sand are blown around by winds. Subtle variations in the landscape allow grains to settle in sheltered zones away from the wind, creating small sand patches. These patches grow, trapping more sand until recognisable dune features are formed. Barchan dunes develop when the wind blows consistently in one direction, whereas star dunes form where the wind blows from multiple directions.

Go with the flow
Water is vital to all life on Earth, making it an obvious starting point in the search for extra-terrestrial life. Geological landforms on Earth trace the history of ancient river systems (Fig. 3a), and these features are easily recognised on Mars’ surface. Jezero Crater, the landing site for the Perseverance Rover, contains the remains of an ancient delta (Fig. 3b), suggesting traces of life could exist within its base. 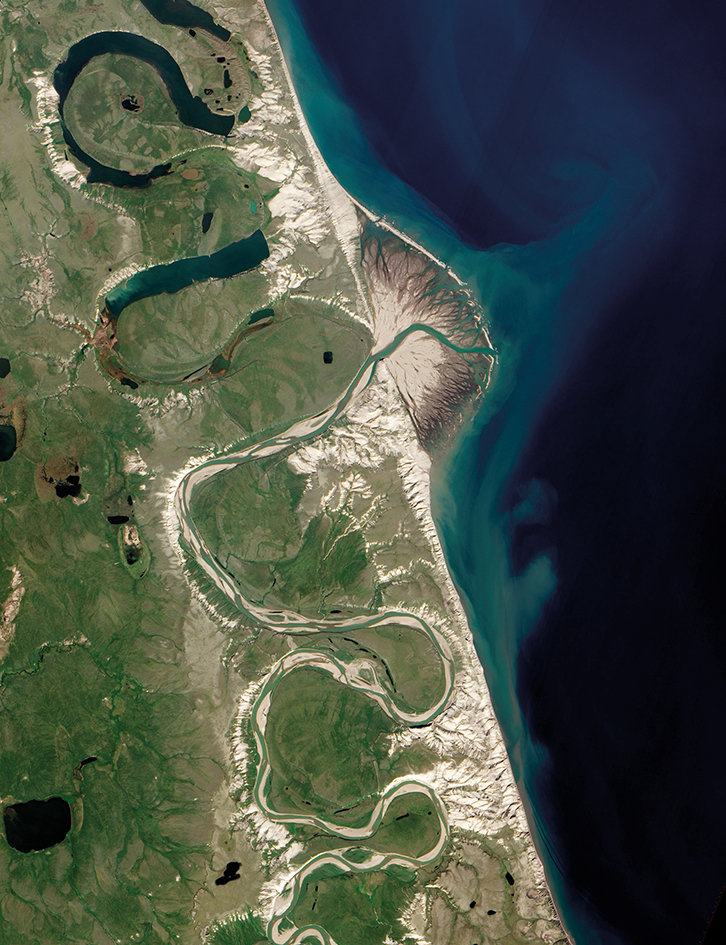 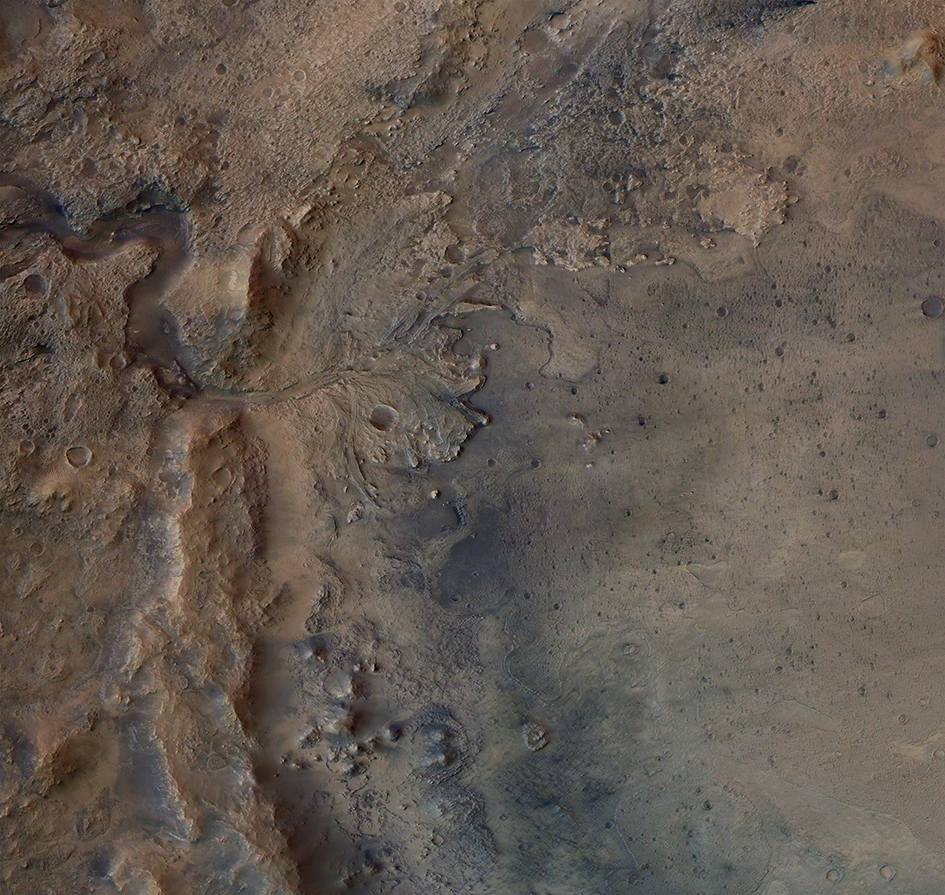 (b) The fan-shaped remains of an ancient delta in Mars’ Jezero Crater – the landing site for NASA’s Perseverance Rover (Image credit: ESA/DLR/FU-Berlin)

Fiery forces
Long after volcanoes become extinct, the scars they leave on land reveal their fiery past. These traces are remarkably similar across the solar system (Fig. 4). We see calderas lurking in the summits of ancient volcanoes where magma chambers have collapsed, and lava rivers winding their way across plains – like liquid fire frozen in time. 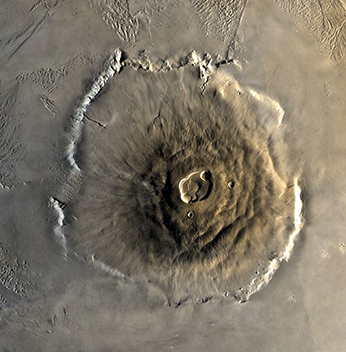 Figure 4: (a) The complex crater system of Olympus Mons on Mars is 27 km high and 600 km in diameter, making it the largest known volcano in the solar system (Image credit: ESA/DLR/ FU Berlin, CC BY-SA IGO 3.0) 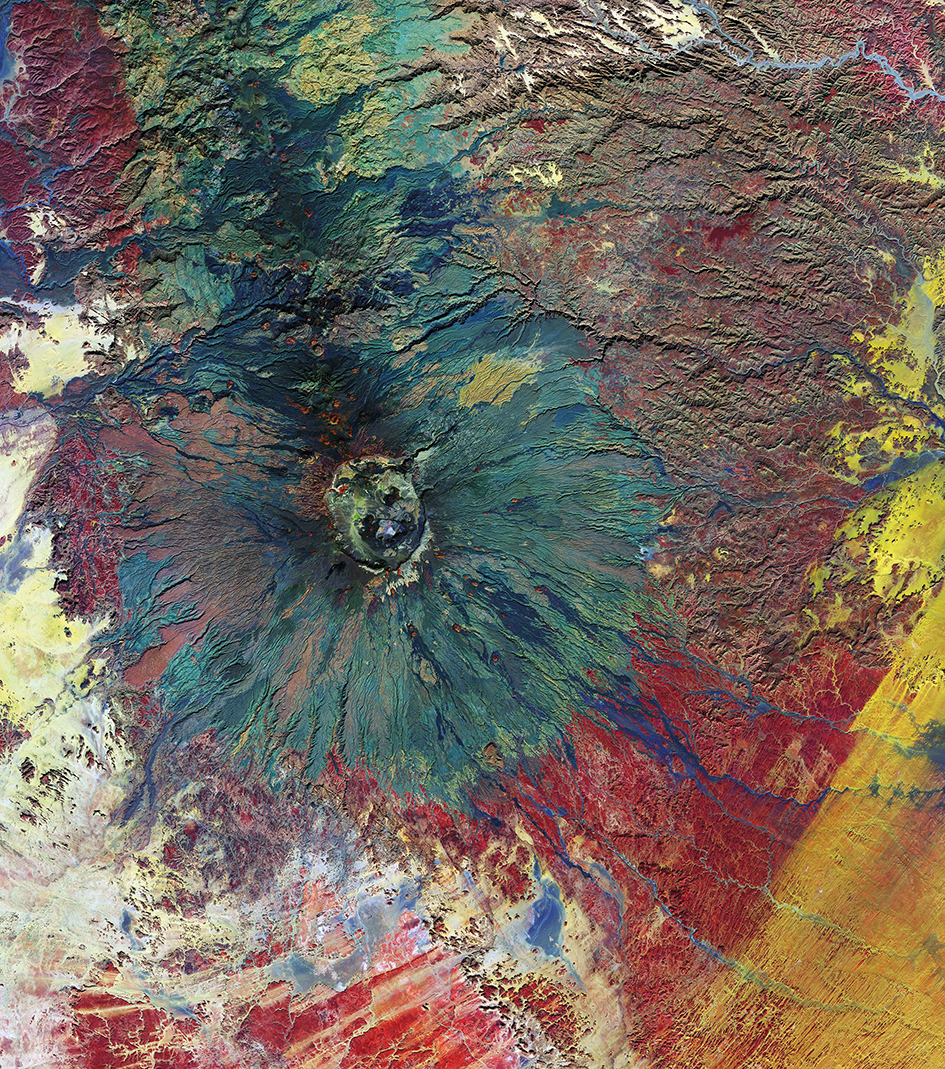 Earth and Jupiter’s moon Io are the only places we know of in the solar system that have active volcanoes. Volcanism on Earth follows a predictable pattern, forming chains where weaknesses in Earth’s crust allow magma to escape to the surface, or popping up where great magma plumes rise from the mantle. Earth is unique in this respect. Dark spots dotted across Io show a random distribution of volcanoes. Since its surface does not shift over time, like Earth’s, the volcanoes are able to reach enormous sizes as lava oozes out over the same spot for millions of years.

Incoming!
The marks of asteroid impacts such as craters (Fig. 5), ejecta, and crushed or intensely heated rocks litter the rocky bodies across our solar system. Compared to the Moon, planets like Earth and Venus have surprisingly few visible impact sites. This is partly because Earth and Venus’s thick atmospheres help to break up asteroids before they hit. On Earth, when asteroids strike, the impact structures are broken down over time by wind, water and other physical processes. 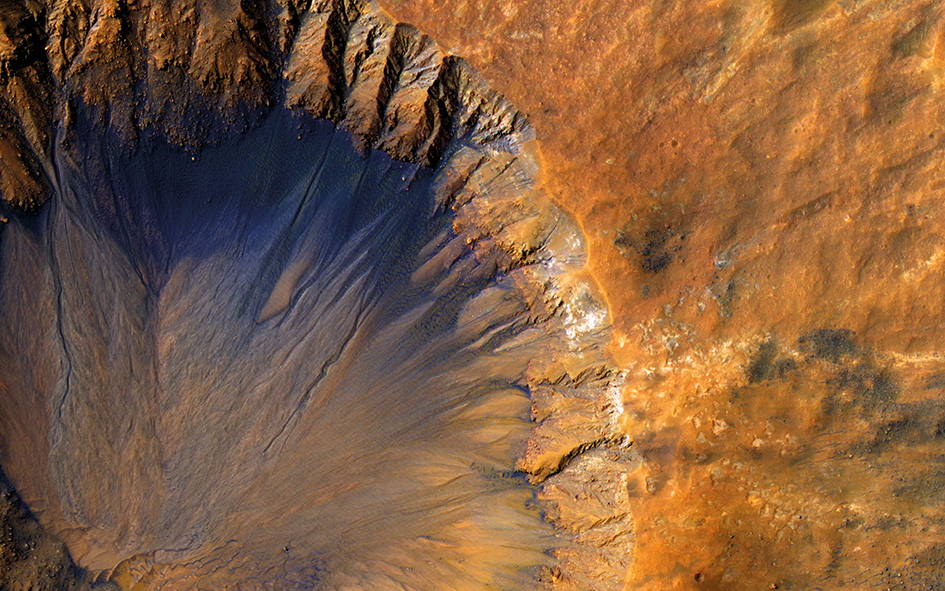 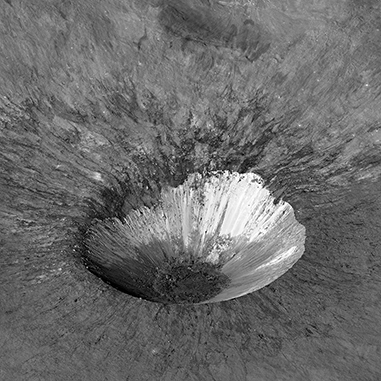 Conversely, the Moon has no atmosphere and no flowing water to erase the marks of impact sites (Fig. 6), meaning they remain intact for billions of years. It therefore represents a geological archive of asteroid and comet activity in the solar system.

The exhibition plans to go on tour. For updates, visit www.spacescapes.geolosoc.org.uk 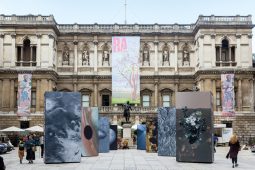 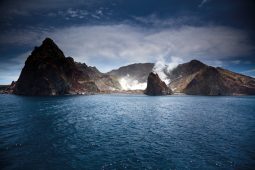 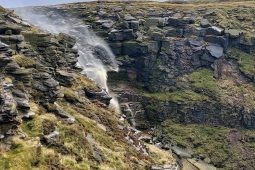 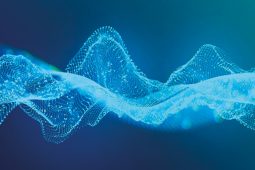