The Early History of an Applied Geoscience Consultancy: Setting up GWP 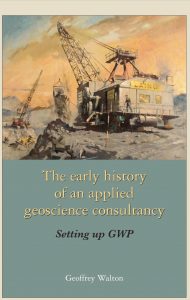 Typically, histories of geology focus on the ‘golden age’ of 19th century geoscientists, the development of geological concepts and, through maps, their territorial expression. This book is unusual as it covers the last half century and deals with applied geology, specifically opencast mining. With the perspective of a historian, Walton narrates the gestation, birth and maturing of his consultancy within the context of contemporary events.

Walton began with the Opencast Executive (OE) of the National Coal Board (NCB). His largely desk based job involved describing coal from cores, quantifying volumes, and preparing plans. Contractors were responsible for the method of extraction and had to accept all risks. The Aberfan disaster had recently occurred and exposed the NCB’s lack of awareness of risks and potential hazards of spoil slopes. A similar situation existed in the OE, which was relatively unregulated compared to underground mining.

Aware that geological structures and past workings hugely affected extraction, Walton’s curiosity led him out of the office to visit operating quarries in his own time on weekends to see what actually was going on. He recognised that many instability problems in active excavations involved seat earths and developed the conceptual model of Intra Formational Shear Zones. Seeing the opportunities for specialist geotechnical advice in the quarrying industry and the chance to be independent, he founded GWP at the age of 34 in 1973.

Although his work expanded internationally, Walton chose to remain small as a specialist geotechnical consultant to the extractive industry, while collaborating with other niche specialists in ancillary fields of planning law, surveying, landscape architecture and hydrogeology as opportunities required. He extended his consulting to the extraction of other stratified materials – bauxites, iron, gypsum, aggregates – which had similar problems to solve.

Walton charts the progress of his firm through the decline of the UK coal industry, increasing environmental consciousness, computer modelling and rising standards. Despite its title, the book covers most of GWP’s existence and is much more than the ‘setting up’ of the subtitle. Perhaps when the inheriting generation writes a sequel of the next half century of GWP, this will truly be the ‘early’ history.

To write a history of an active firm requires a balance of compression and extension to reveal the breadth of activity and overview of current events, while selecting representative projects and clients to demonstrate the technical, social, political, and personal detail of working life. Walton manages this compromise well to make a satisfying read with a useful index.