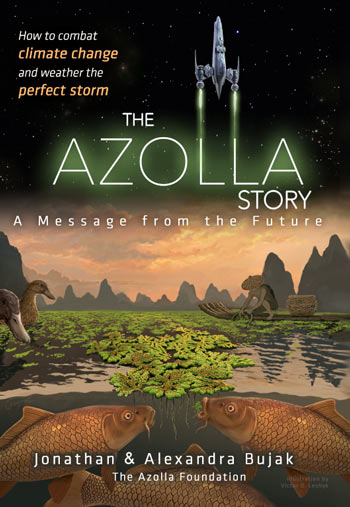 The Azolla Story presents the comprehensive history of azolla, an aqueous green plant that is a symbiotic relationship between a fern and cyanobacteria. Topics covered span the evolution and genetics of azolla, the scientists and farmers involved with azolla, and the politics, benefits to human-kind, and possible future of azolla; there is something for everyone who examines this book. An overarching theme is that humankind is on the edge of a “perfect storm” that threatens our very existence and azolla may play a role in averting disaster.

The book begins in the Middle Eocene (49 million years ago), when Earth evolved from a greenhouse planet to an icehouse setting. Jonathan and Alexandra Bujak suggest that a simple green plant may have ushered in this turning point. How can this happen? Azolla forms a floating mass on water with low salinity a few centimetres thick that can double its mass over several days. Such an environment existed across the Arctic Ocean, near the end of a long period of greenhouse Earth. But oceans are salty, >3% of total dissolved salts – yet geologic evidence suggests that azolla mantled the Arctic Ocean surface, perhaps completely, around the change from greenhouse to icehouse. Could an incredible azolla bloom across the Arctic have sequestered enough CO2 to generate such a change in Earth’s climate? How did a freshwater plant survive in an ocean and assimilate nitrogen? How was the plant fertilized? These and many other questions are addressed.

An interesting approach is used by the authors: flashbacks. For example, the events of the Middle Eocene are interrupted by details of an Arctic expedition. The book jumps from present to past as the complete history of Earth, all 4.5 billion years, is synthesized. One of the shifts to current topics describes a critical meeting in May 2007 in Utrecht, Netherlands, where a diverse group of scientists discussed many of the questions raised above. The book returns to geologic deep time and then back to Utrecht. At first, I was confused by these shifts in time, but, as I caught on, I found this approach to be extremely successful – it formed a nice orchestration between deep time, present time, and the scientists that linked the two.

The detail in which many scientific, political, and philosophical topics are covered can be overwhelming, especially to those not proficient or who lack interest in a given topic. The book contains exhaustive foot notes, references, and glossary, which can lead the reader into even more depth on a topic. In summary, this is an impressive piece of work that should find interest amongst a wide range of readers who are interested in the possible mitigation of our current climate crisis.