Palaeoclimatology: From Snowball Earth to the Anthropocene 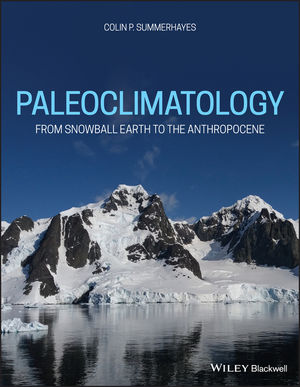 This is a magnificent book, and is the best in-depth treatment of palaeoclimate that I know: a text that systematically explores the evidence and the detail. It is a development and update of Colin Summerhayes’ Earth’s Climate Evolution of 2015, now taking climate history back to the Snowball Earth glaciations of late Proterozoic times, and taking on board the enormous palaeoclimate literature published since then. The lengths taken to cover this literature are truly staggering—the bibliography alone encompasses nearly 2000 papers.

How to synthesize such a mass of data and deduction, and yet make it readable? (The IPCC reports, for instance, magnificent as they are, can be very hard going.) One ploy used here is to tell the story through the many researchers that built the science—not only through the early savants such as Agassiz, Buffon and Tyndall, but going right into the modern era with the likes of Jane Francis and Valerie Masson-Delmotte.  This approach humanizes the interweaving narratives and nicely leads into the evidence and the evolving concepts, often via exploration and explanation of the individual papers these people wrote. At 543 closely argued pages, this is still a mighty book that is not to be read at one sitting, but this perspective, together with a clear writing style, helps the reader cope with the (necessarily) enormous scale and complexity of Earth’s climate narrative, and does an excellent job of making the story approachable.

The book extends beyond palaeoclimate history to explain the different controls on climate: palaeogeography, atmospheric composition, astronomical configuration and so on, and how they are integrated within climate models. This part of the narrative follows the same effective pattern, tracking how evidence was painstakingly—and sometimes quirkily—built up, and how the lines of conceptual logic were developed (and, indeed, are still developing).

The 700-million-year history naturally becomes covered in increasing detail as we approach the present, with something like a third of the book devoted to the climate evolution of the Pleistocene, Holocene, and now the Anthropocene, with good discussion on the warming trajectory of the last half-century. Forward projection is kept to a sensible and appropriate minimum.

Overall, this book gives indispensable context for understanding Earth’s climate evolution. Any glitches? Perhaps a couple: no index to the many people whose work is described, and in those biographical descriptions the lists of honours awarded can become a little de trop. But, these are minor issues. I whole-heartedly recommend this wonderful book.