How the World Really Works 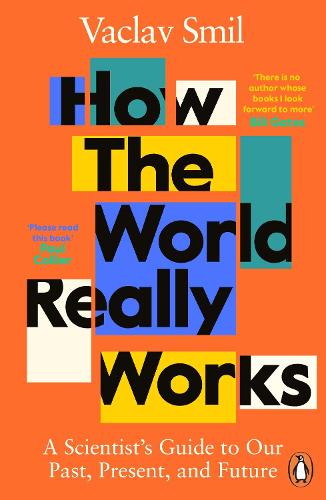 Vaclav Smil is a Fellow of the Royal Society of Canada and was included on Foreign Policy’s Top 100 Global Thinkers list. Here, he explores seven fundamental realities governing our survival and prosperity: energy and food production, our material world and its globalization, risks, and our environment and its future. He offers a much-needed reality check and a heavyweight counter to the wishful, or even counterfactual, thinking that informs much of the current debate regarding where we are headed and what we can do about it.

Smil reminds us of the world’s undeniable dependence on an enormous and long-lived fossil-fuel-based infrastructure. At the current rates of wind and solar energy introduction, it will take decades until renewable sources replace fossil fuels, and many more decades before alternative sources of energy (such as hydrogen, which itself is generated using electricity) will replace fossil fuels to drive our cars, farming vehicles, trains, ships, and aeroplanes. He reminds us that modern civilization is supported by four essential pillars: steel, ammonia (for the production of nitrate fertilizer), cement, and plastics (which are derived from fossil fuels). Even with abundant and reliable renewable energy, new large-scale processes to produce these four basic materials need to be developed. As yet, such processes show no signs of emerging at the global scale required. There is no indication that such an economic transformation is likely in the short to medium term, despite the UK increasing electricity generation from renewable sources to 50% of the total since 2006. Electric cars are beginning to make an appearance, especially within advanced economies, but we are far from the days when all cars are electric.

“The high relative share and the scale of our dependence on fossil carbon make any rapid substitutions impossible: this is not a biased personal impression… but a realistic conclusion based on engineering and economic realities” says Smil. He is not alone. The International Energy Agency sees the share of fossil fuels declining from 80% of global energy demand in 2019, to 72% by 2040, although, with aggressive policies, this could fall to 56%. Under these circumstances we are still likely to see 50% of our global energy supply coming from fossil fuels by 2050. Unless we can achieve zero carbon, where we extract the same amount of CO2 from the atmosphere as we create, we face an undeniably hot future, with a raft of new concerns for human survival.

Lest this makes you downhearted, I should say that Smil is a pragmatist. He is convinced that humans are clever enough to get themselves out of serious difficulties. Although, undeniably, we are in for a rough ride as our use of fossil fuels gradually declines. Yes, the information world is fast-moving as we acquire mobile phones and ‘friends’ on Facebook, but Smil argues that “Securing the sufficient delivery of water, growing and producing crops… and extracting and altering raw materials to fit a myriad of users are endeavours whose scale (required to meet the demands of billions of consumers) and infrastructures (that enable the production and distribution of these irreplaceable needs) belong to categories that are quite distinct from making a new social media profile or buying a more expensive smartphone”. Artificial intelligence is not the answer, it’s a distraction. If you are listening too closely to techno-optimists, remember caveat emptor (buyer beware).

As other reviewers have noted – Smil’s book is a brutally realistic assessment not only of where we are at the present, but also of how we might tackle biodiversity loss and global warming as time goes by. Everyone should have a copy of his remarkable book.