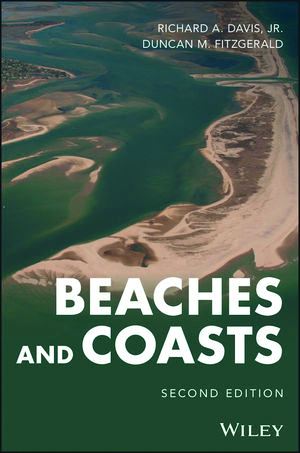 The world’s coastlines are of geologically recent origin, most of their geomorphic features (other than a few relict ones) having arisen since the transgression at the end of the Pleistocene. Seaboards are as diverse as any geological setting on Earth, and of great importance to humans, with many people gaining their livelihoods from them. Davis and FitzGerald have, in this revised edition of Beaches and Coasts, risen to the challenge of publishing a concise and informative book that summarises the nature of Earth’s different coastlines. It also describes the various processes that formed these coasts, and the many factors (climate change, sea-level rise, urban development) that make maintaining the integrity of coastlines challenging.

The authors take a novel approach, such that their book’s title belies its full scope. Prior to describing shoreline systems (deltas, estuaries, tidal flats and so on), they provide an overview of plate tectonics and then classify coastlines according to their plate tectonic settings. They group coasts into three categories: collision types, trailing edge types and marginal seas. These differ in part in the scale of the rivers draining them, collision coasts having short rivers and trailing edge coasts having long ones. They differ also in the nature of the continental shelves, which are narrow on collision coasts, wide on trailing edge coasts, and bordered by offshore island arcs along marginal seas. Trailing edge coasts are subdivided into Neo-types (geologically <30 million years old) resulting from continental rifting, Afro-types around continents lacking opposing collision- and trailing-type coastlines, and Amero-types along passive, Atlantic-type margins.

Superimposed on this classification are the effects of modern climates, weather systems such as hurricanes, wave types and their propagation, and tides. A brief description of sediments and rocks is presented, but the mineralogical component is kept to a minimum, shoreline sediments containing primarily four mineral types: feldspars, quartz, clay minerals and carbonates.

With this background in place, the authors describe the many shoreline systems, noting in which plate tectonic setting they primarily occur. The emphasis is on depositional features, but one chapter is devoted to rocky coasts. In addition to diagrams showing systems’ evolution, photographs from worldwide settings are provided to illustrate them. Boxed case studies add depth; I particularly enjoyed one describing historic car races at Daytona Beach, Florida. This book is designed for introductory students, bibliographic references being kept to a minimum. However, it has much to offer to those in more advanced courses and those working in coastal management.